Quite excitingly Brocaps has been very active recently. Straight into April Brocaps introduced his new line of keycaps “Precision Gaming”. 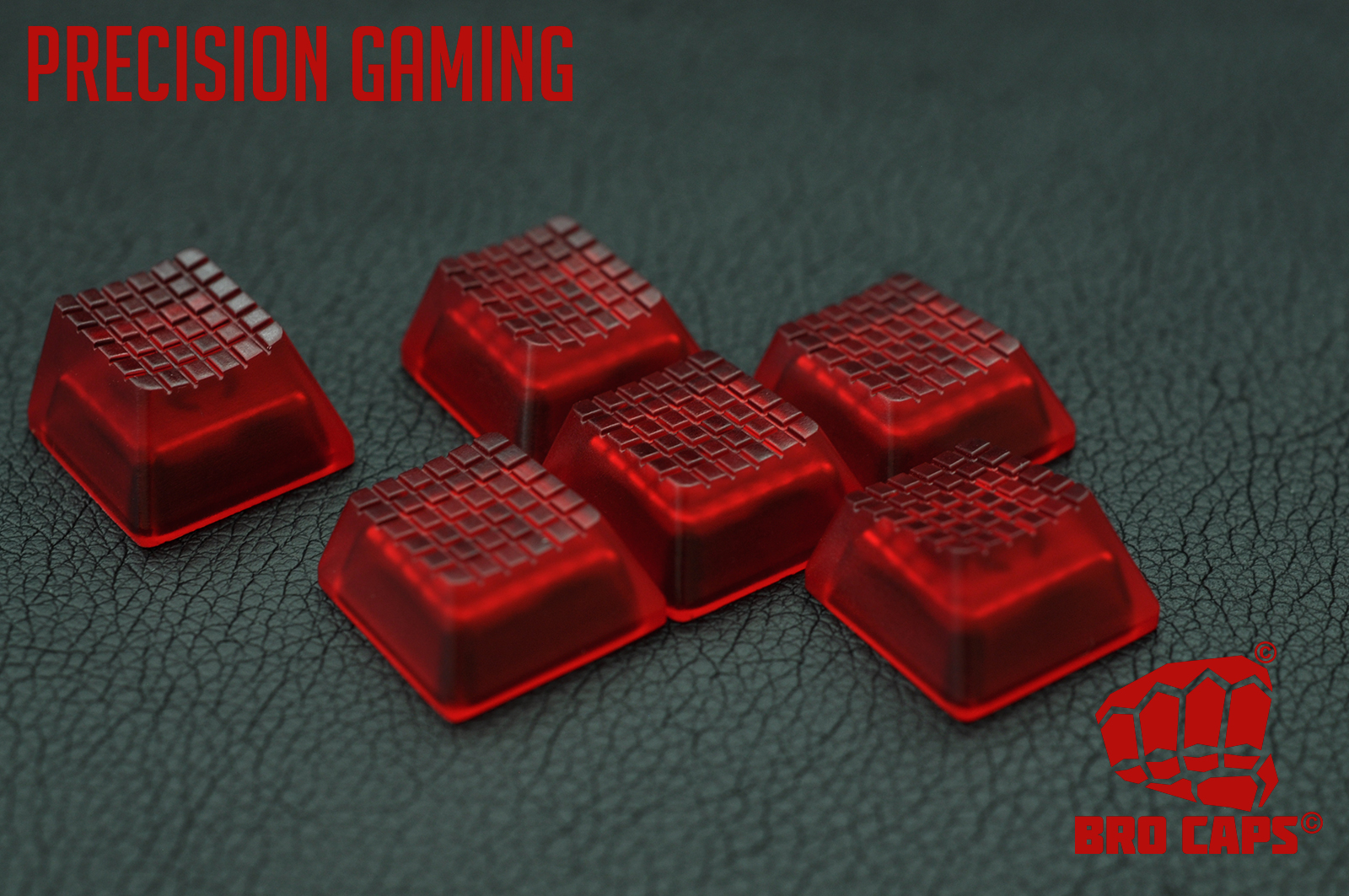 The current release of keycaps are the “Topre Gamers Set”. The current offering is: Esc row key, WASD keys and Fn keys. This of course draws similarities to the previously ongoing announcement of the previous Topre Gamer Set. However one difference is the Esc row key.
I think this announcement is more representative of what he may be offering and the previous thread was just more of a showcase. However, these keycaps are looking incredibly nice. Brocaps standards are impeccable and these are some stunning looking keycaps. The texture on them looks amazing and the colour is very deep and almost entrancing. These are certainly holding a high standard for artisan keycaps. It is fair to say that the reception has been great for these keycaps. But this is a common theme with Brocaps.

Initially this was only a tease. The keycaps shown were pastel coloured Topre in Esc row, WASD and Fn. There are both textured caps which I believe to be the gamer keycaps and Brobots v2 for the Esc row. The sale eventually happened on the 15th of April. While this was not quite Easter, the sale was good. It did include Brobots V2, Bronads and the Topre Gamer set’s. Again Brocaps set’s quite a high quality and these keycaps lived up to his designs.

This was another almost surprise sale. It featured mainly green and purple keycaps. The full list of what was included is here it is quite a long list. Nothing much to say about these. I’m not a huge fan of the colours but his impeccable quality can still be seen in these caps. 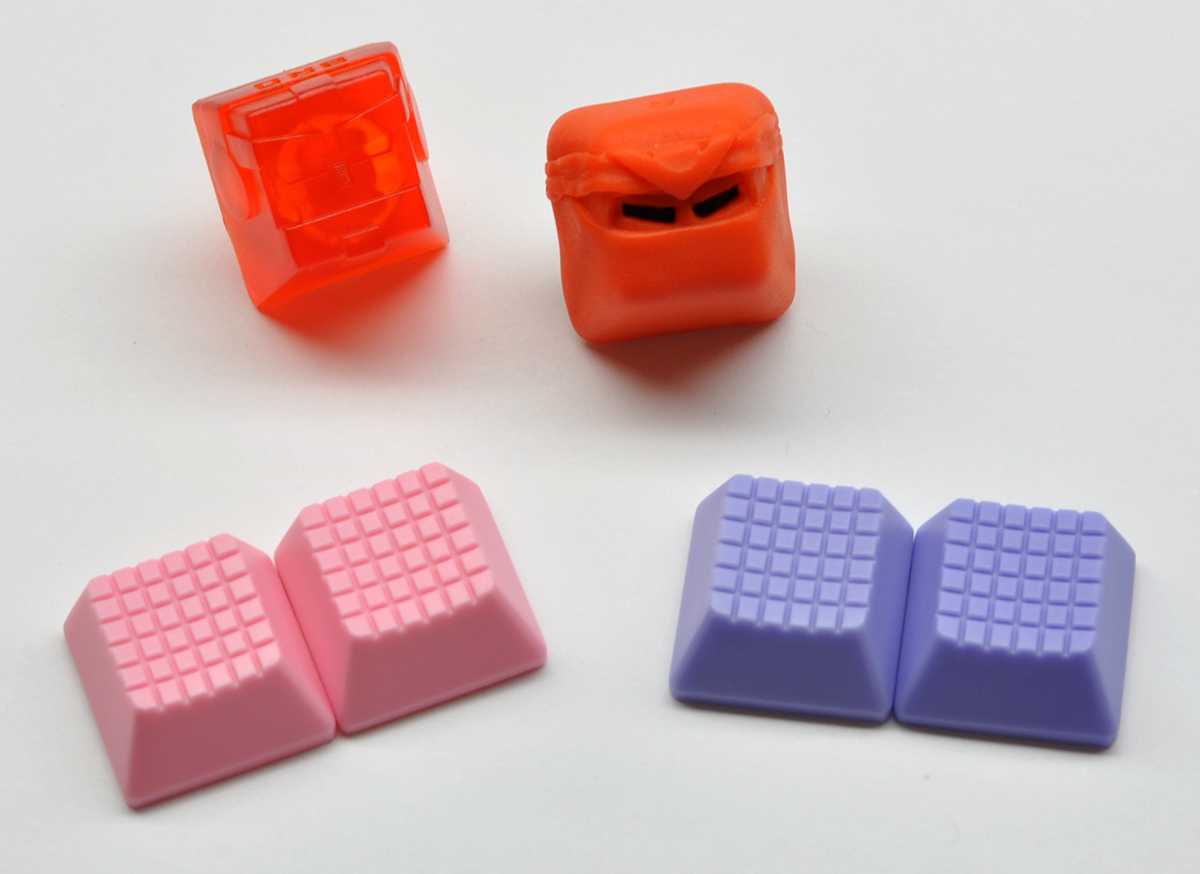 This was a small giveaway following the previous sale. It featured quite a nice range of different keycaps including some nice pink Topres. The frequency of the current Brocaps sales is quite refreshing as it gives more people opportunities to get the keycaps they want, and for new people to enter the market. 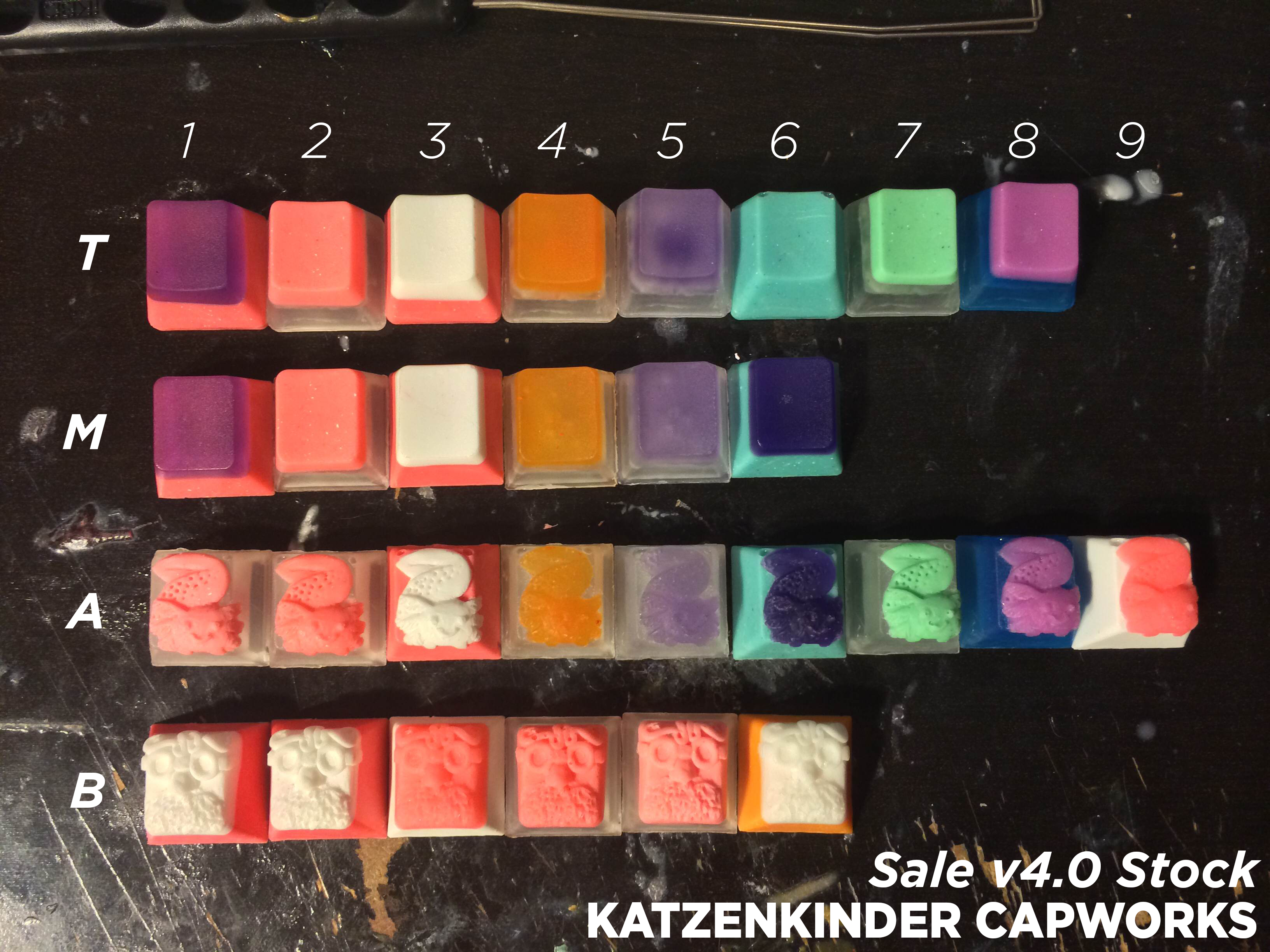 I think KatzenKinder is a great keycap maker and I really like the colour combinations used in most of their keycaps. The Axol design is also a very nice signature keycap. 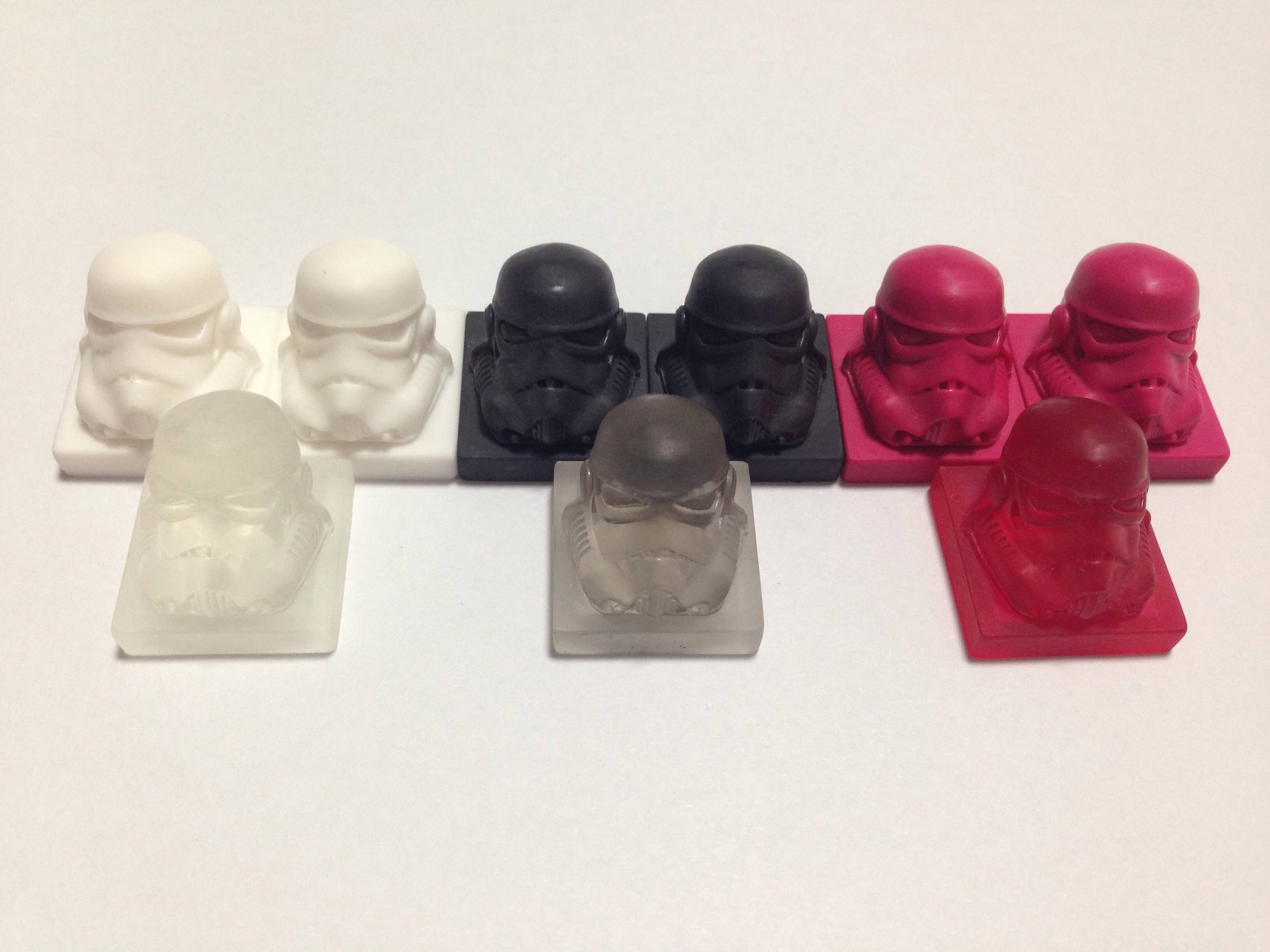 Girldc is someone who I was not aware of until recently. I had seen their caps before, but I didn’t know who made them. Recently there has been a resurgence in production or so it seems. As I understand it they may or may not be banned at geekhack.
I was drawn to this information by this thread. From my perspective they make some very nice keycaps and the metal keycaps are quite a niche that when done well, work well. I would like to see a return of Girldc to the geekhack marketplace but who knows what will happen.

I’m not sure is there is any collaboration between v0idtek and YM_Industries. Nevertheless, v0idteks post on /r/MK drew my attention to these 3d printed keycaps. They are quite unlike anything you may have seen a lot of. It is certainly nice to see some new keycaps that aren’t just fancy designs. This really mixes things up. Whether or not it will work, remains to be seen. 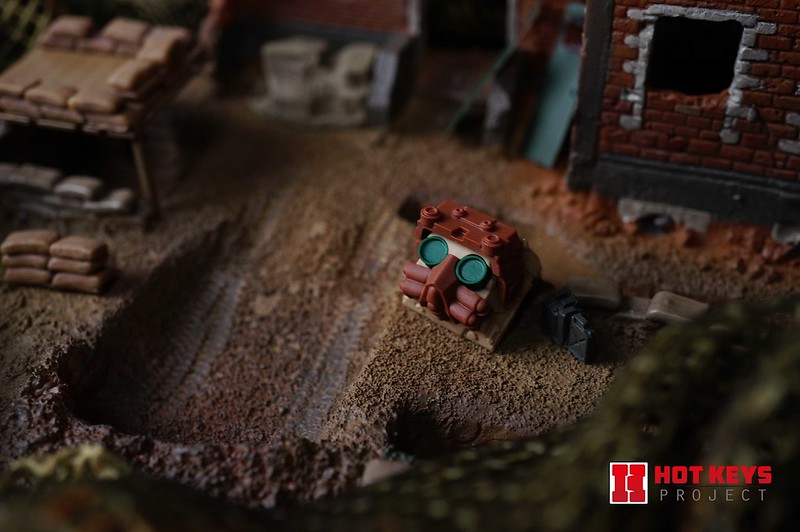 HKP photo. Links to sales thread.
The Hotkeys Project has also been quite active this month. Most notably is the sales through https://mechanicalkeyboards.com. This is quite interesting and a step up from forum selling. It is a sign of the times when an artisan keycap maker is able to sell through these channels and nice to see some evolution in the market. The demand is for the product is clearly shown by how selling methods have been adapted. Also, note that the caps being sold through mechanicalkeyboards.com include exclusive to the store keycaps. The April sale began on the 29th and ended on the 1st of May.
This sale featured:

I think the ravens are the best of Hotkeys designs and it seems to be the most sought after or at least in league with the gasmasks.
This sale was also accompanied by a giveaway that ended on the 30th. It seems customary now for any sale to end with some form of giveaway. This seems like a nice tradition as it again gives people a chance go get more caps. The giveaways also take quite a creative form where answers have to be thought out. So I think this is one of the fairer systems.

Krytone had a recent sale titled MetalliKrap. I recommend checking the thread to see some pictures of the recent keycaps. I am not a huge fan of their designs, but I do appreciate the talent. They all appear to be very well made with no visible defects. The colour combinations are also quite different. Krytone is doing something a little different to everyone else. Although Krytone seems to be a smaller seller their quality is still up there with the rest, I am sure you have seen their work elsewhere before. 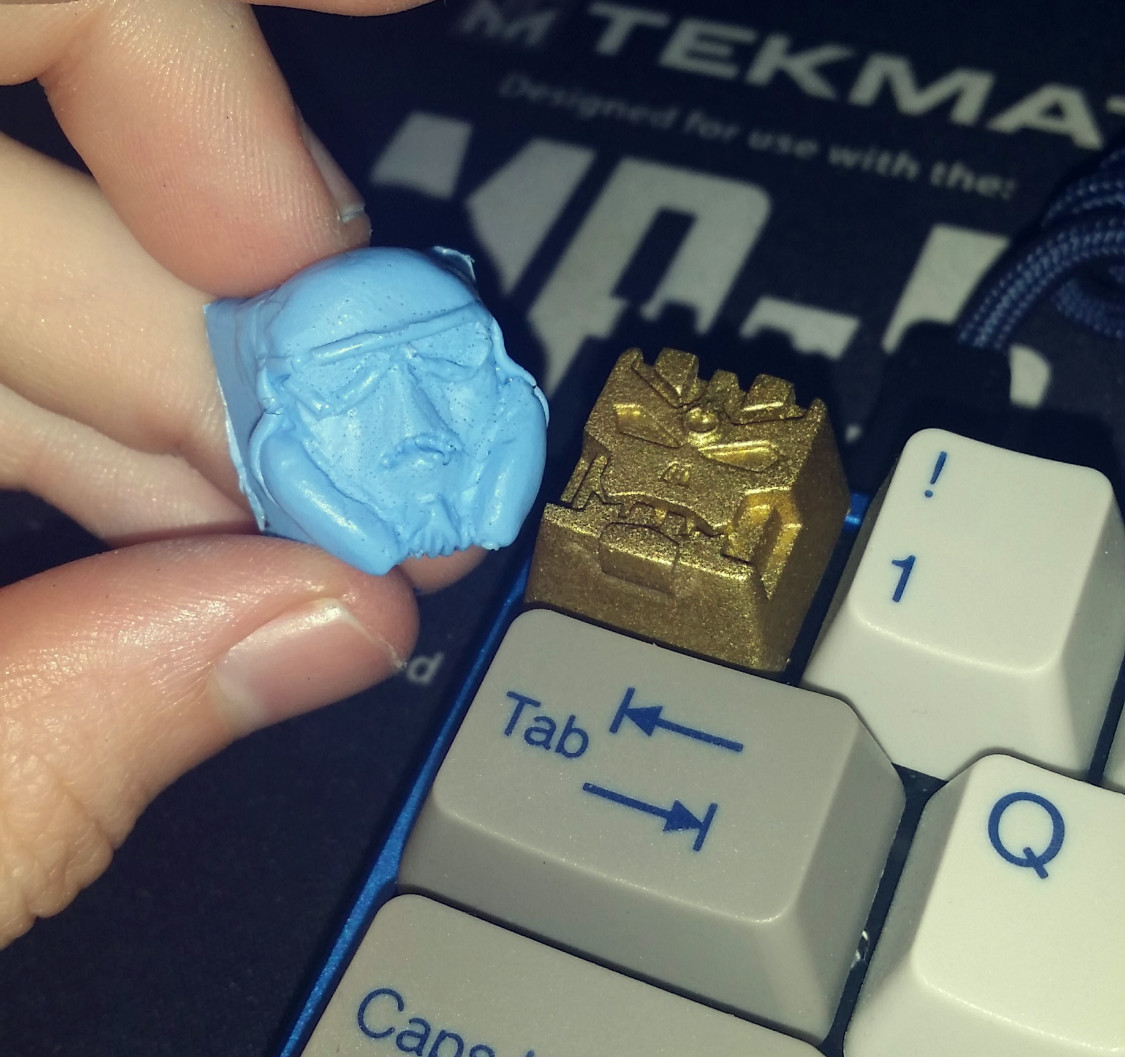 Buckling is still around and with another storm trooper iteration. It’s certainly not perfect but is an improvement on the previous versions. They are worth keeping an eye on as there is some definite improvement. Keep going and you never know what could happen. 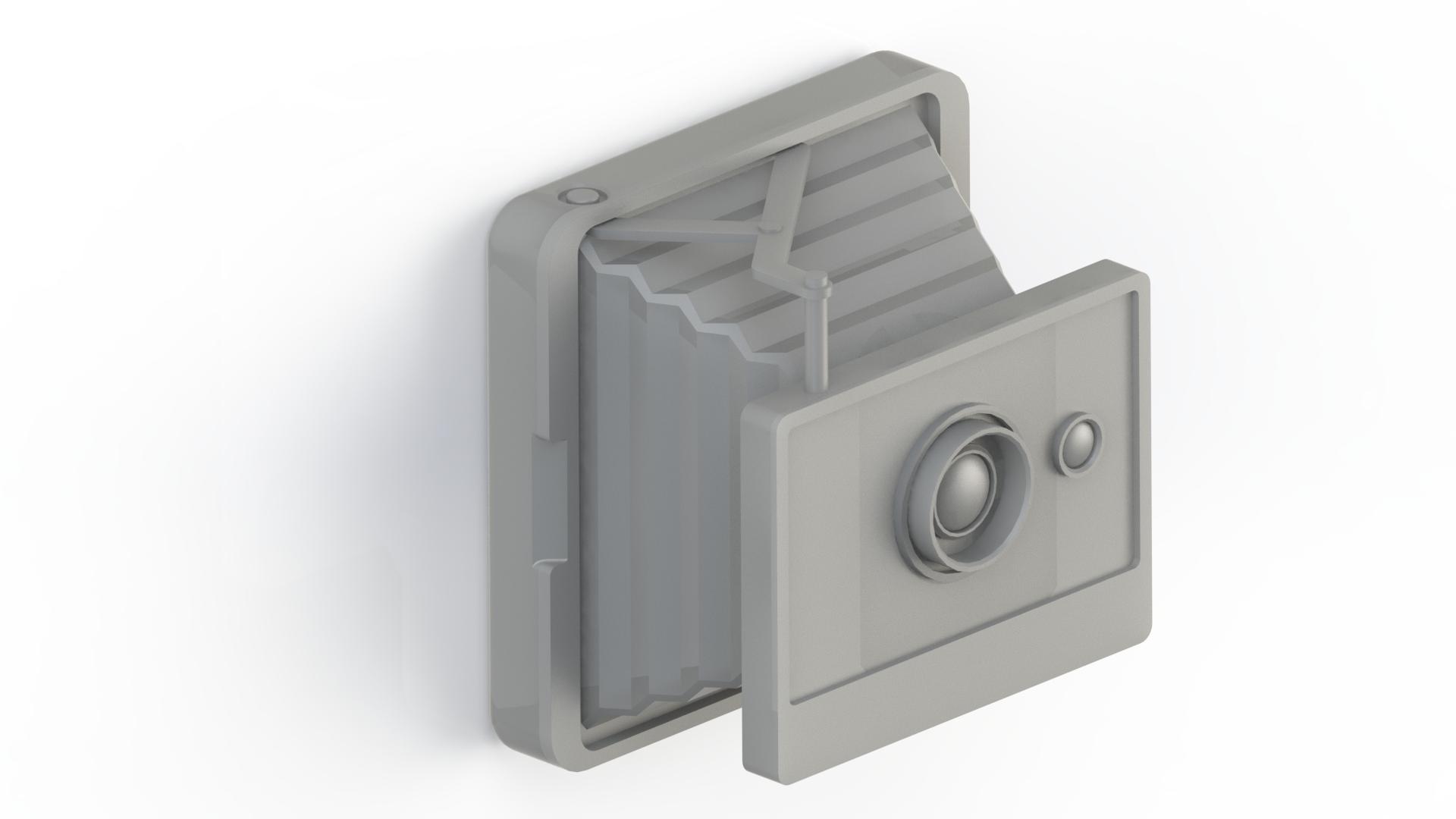 A potential keycap maker. Only with one design of a polaroid keycap, the design seems very popular. It might only be launching in a semi private groupbuy at this stage. But I expect it will be available at some point. Quite rightly there are worries over the durability of 3d printed caps with smaller parts. 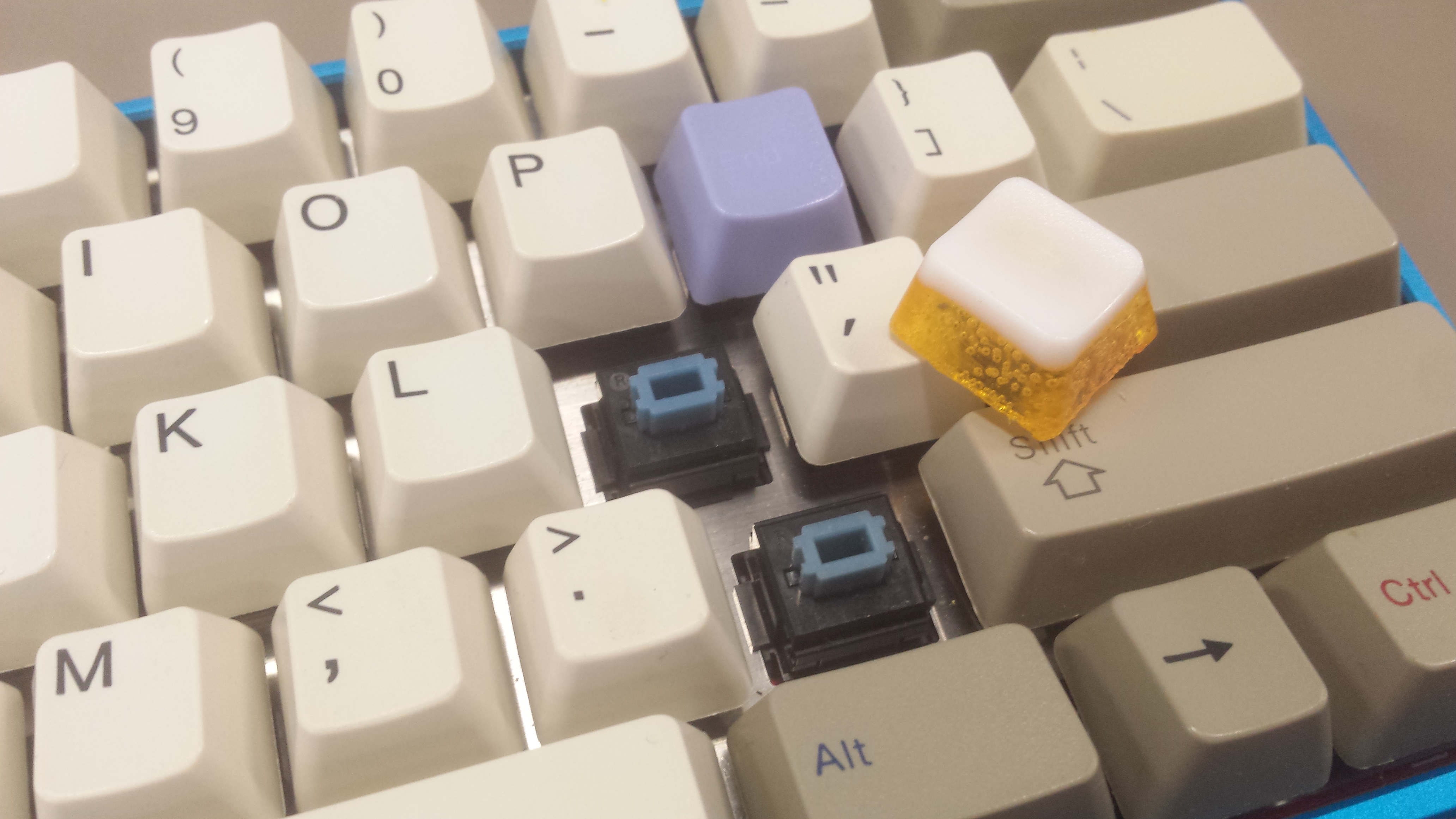 Quite a late addition to this months edition is WinterWinds. Last month they created the watermelon keycap which I only gave an honourable mention to. This month they have created a beer cap. This may have some controversy surrounding it as has some obvious similarities to the clack of the similar nature. However I think this edition is fine, whilst it is quite a fine line, it does have some differences. Most obviously the addition of bubbles to the base, but most interestingly the fact it is an alps cap. I don’t think Clack Factory has produced this particular design in alps form. From a design perspective it appears to be well made. It looks smooth all around, with no visible blemishes. This is all quite impressive from someone who doesn’t appear to have made a lot.

There has been an update on the JTKeycaps and [CTRL]ALT. Initially the groupbuy was going to start on the 1st of May however that seems to have changed to the 5th. From the photos that have been released so far they seem of high quality. There is nothing to say that is not speculation at this point. But I will say it anyway, this will probably bring good things to the community.
As well as this development a ‘JT Keycaps’ account has been created on geekhack. If you had any doubt that this was going to involve integration and communication with the community, this should be evidence enough to suggest otherwise. Already they seem to be skipping one of Signature Plastics biggest criticisms.

As I was writing this, I noticed a lot of the content may have been a bit useless. There have been a lot of sales recently and listing past sales is not really beneficial to anybody. But what I was trying to create with these posts, was a comprehensive goings on in the artisan keycap world. So I think I will include this stuff for now. But I may change up the format in the future. The main goal was to shed light on some smaller makers who might not be getting the attention they deserve. I would like to share their artwork to those who might have missed it. But then again I might also miss it, so if I miss anything I am sorry.