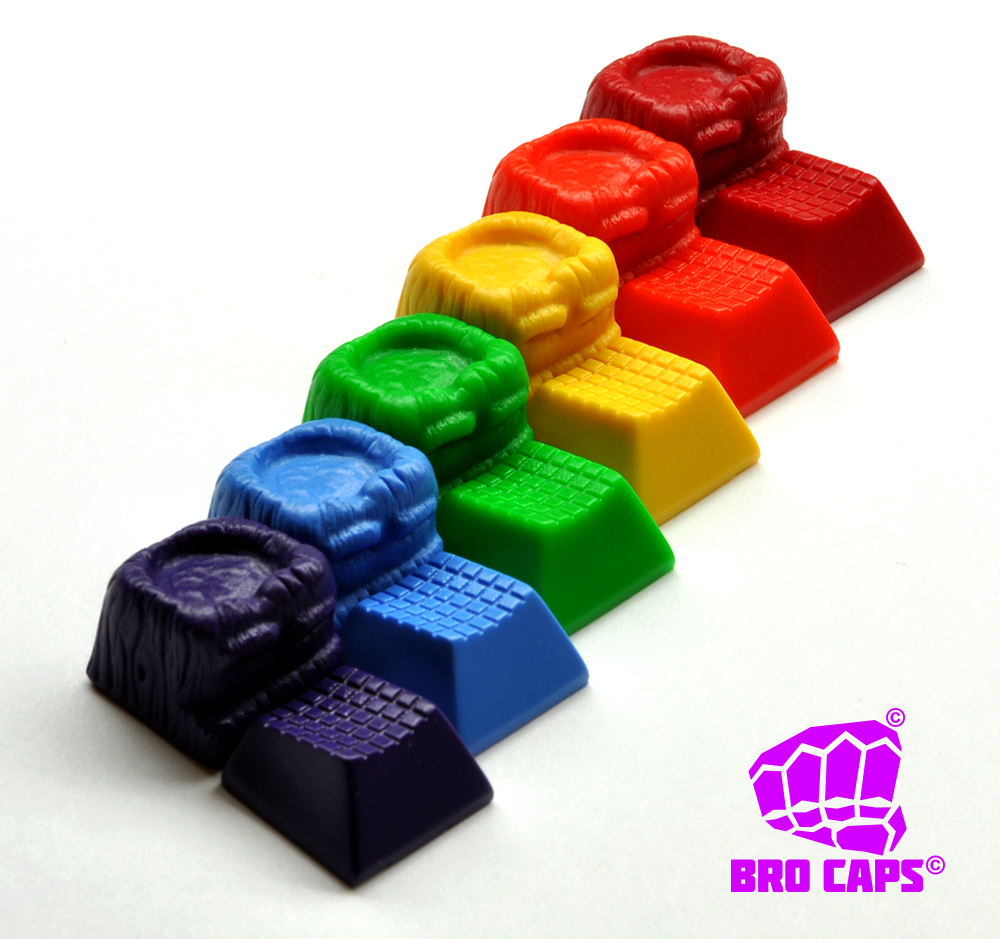 Brocaps who has recently concluded his “#shithappens” auction where he auctioned off two caps. A cherry v2 brobot for $825 and a topre v2 brobot for $800. Is most likely preparing for an impending sale.

Recently there have been some images emerging of the new lick the rainbow keycaps. As of yet there has not been an official sale. However it seems there was a small presale that took place sometime around the 26th.[1]
The sale was teased a short time ago on the 19th. But it was overshadowed by the “#shithappens” auction. I’m not sure if this will delay the sale or even if there even will be a sale. But these are certainly some nice looking keycaps.
The sale seems to include:

The colours seem to be:

So keep an eye out for a sale, it might be soon, who knows.

Well Brocaps has certainly being busy and it has paid off. His new caps are looking better than ever. The textured caps look incredible and the colours are out of this world.
But alongside the “Lick the Rainbow” set he has been creating the Topre Gamer Set. The Topre Lineup is as Follows:

This is information that I have just gathered from the thread and nothing is official or final. This is just my conjecture. <h2>Synjin: Topre Fn</h2> 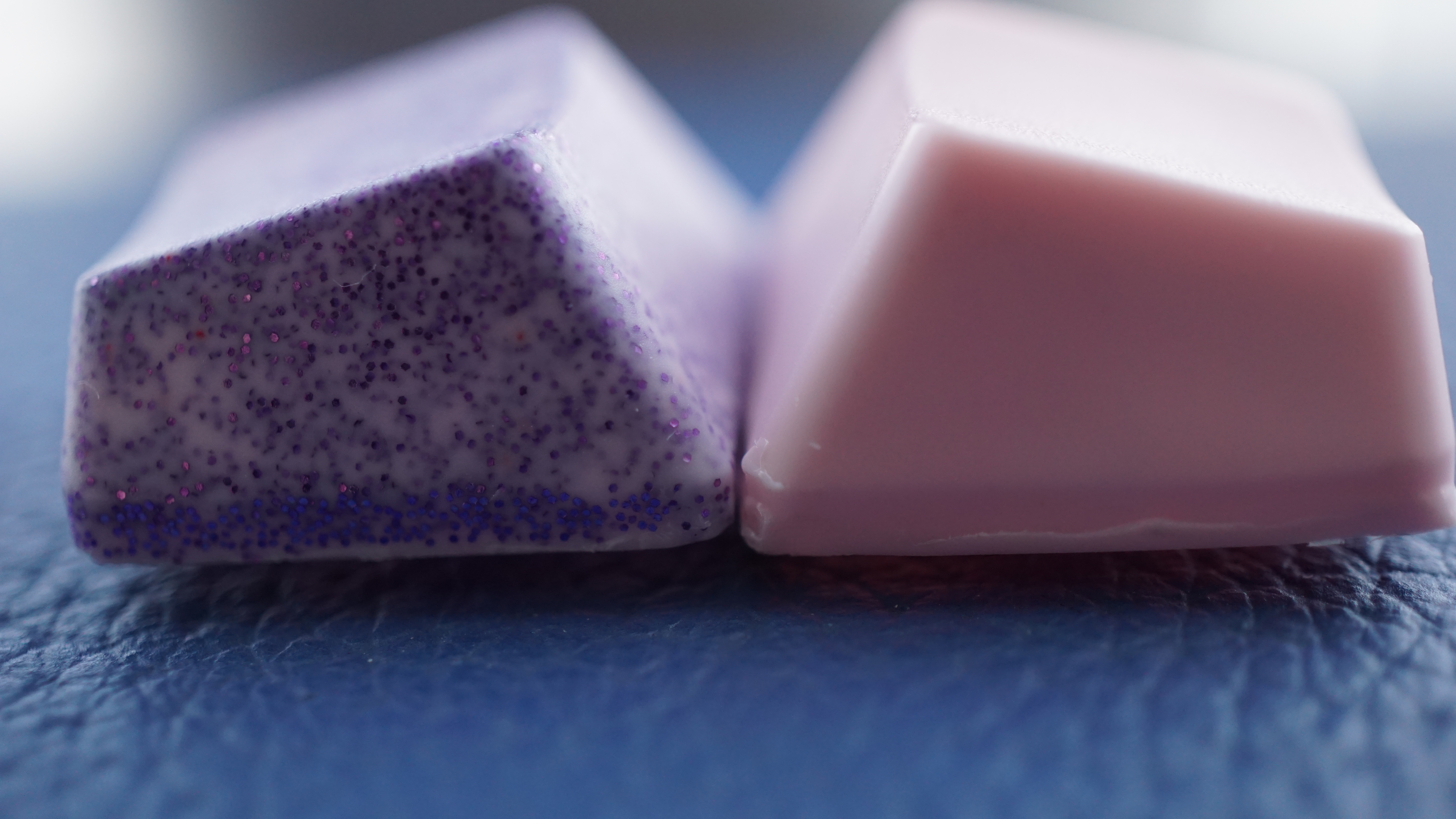 Synjin seems to have entered the artisanal keycap world, with some very good prototype keycaps. Currently he seems to be creating Topre Fn keys, but most interestingly Topre spacebars. This is something that you don’t see a lot of with artisan keycaps. It seems he might be taking requests or commissions. If you are interested be sure to head over to his thread. These are turning out to be some very nice keycaps. He is definitely someone to keep an eye on.

<h2>kudos_and_godspeed</h2> Another relatively new artist has entered the scene and he is looking very good. They appeared just under a month ago on r/mechanicalkeyboards, with a Topre Fn cap. The future is certainly looking good for Topre artisinals. But their first cap “Spilled Mountain Dew” was certainly a very strong effort. 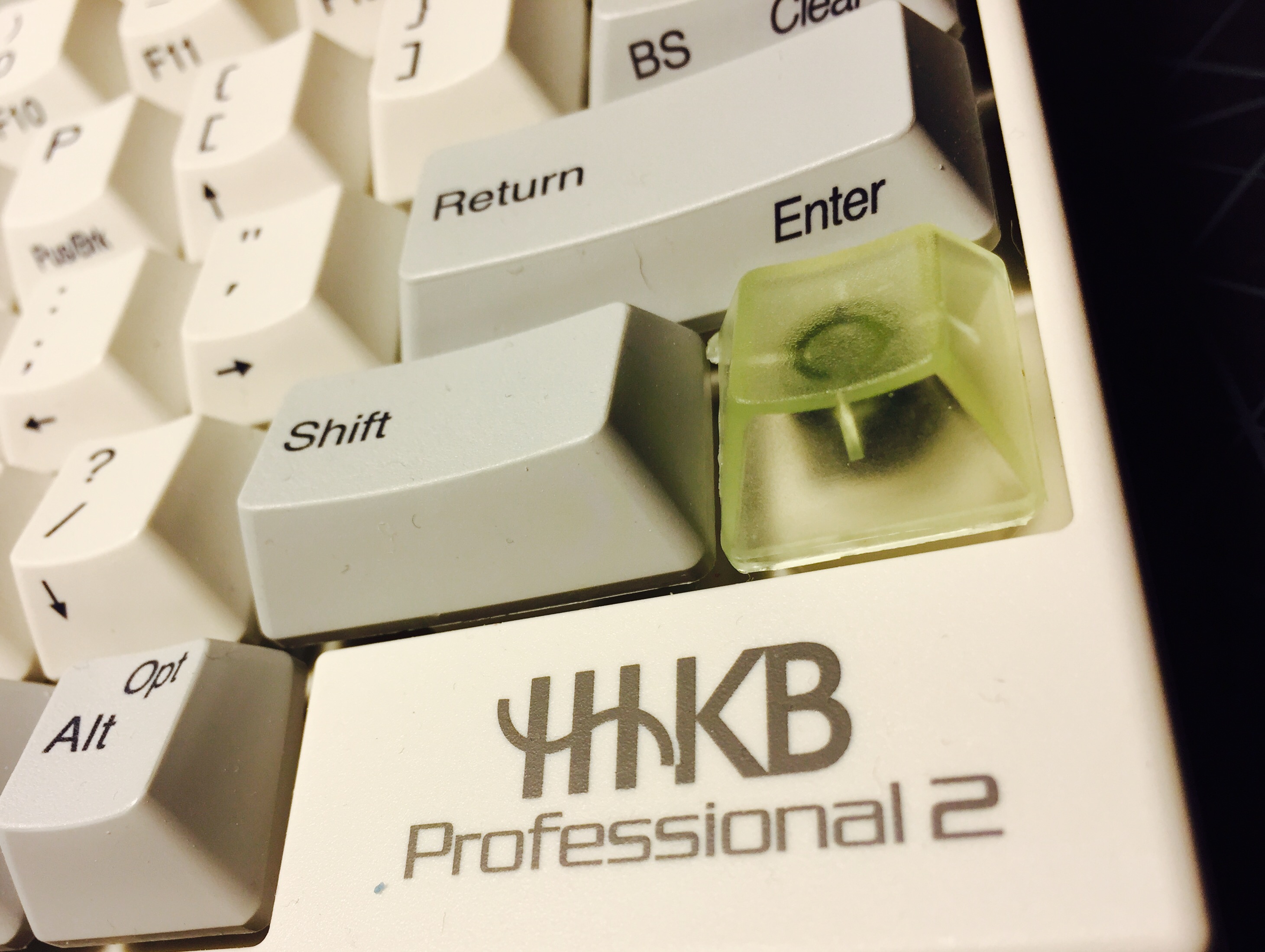 And their caps have only gotten better. My personal favourite is the “Spilled Purple Drank”. Be sure to check all of their work out. They have recently been experimenting with double pour artisans. Although their not quite there yet there is definite promise in their keycaps.
From their recent posts it seems like they are trying to ramp up production so keep a look out.
I can only find their profile on reddit so be sure to watch their posts. <h2>Hipsterpunks: KWK</h2> 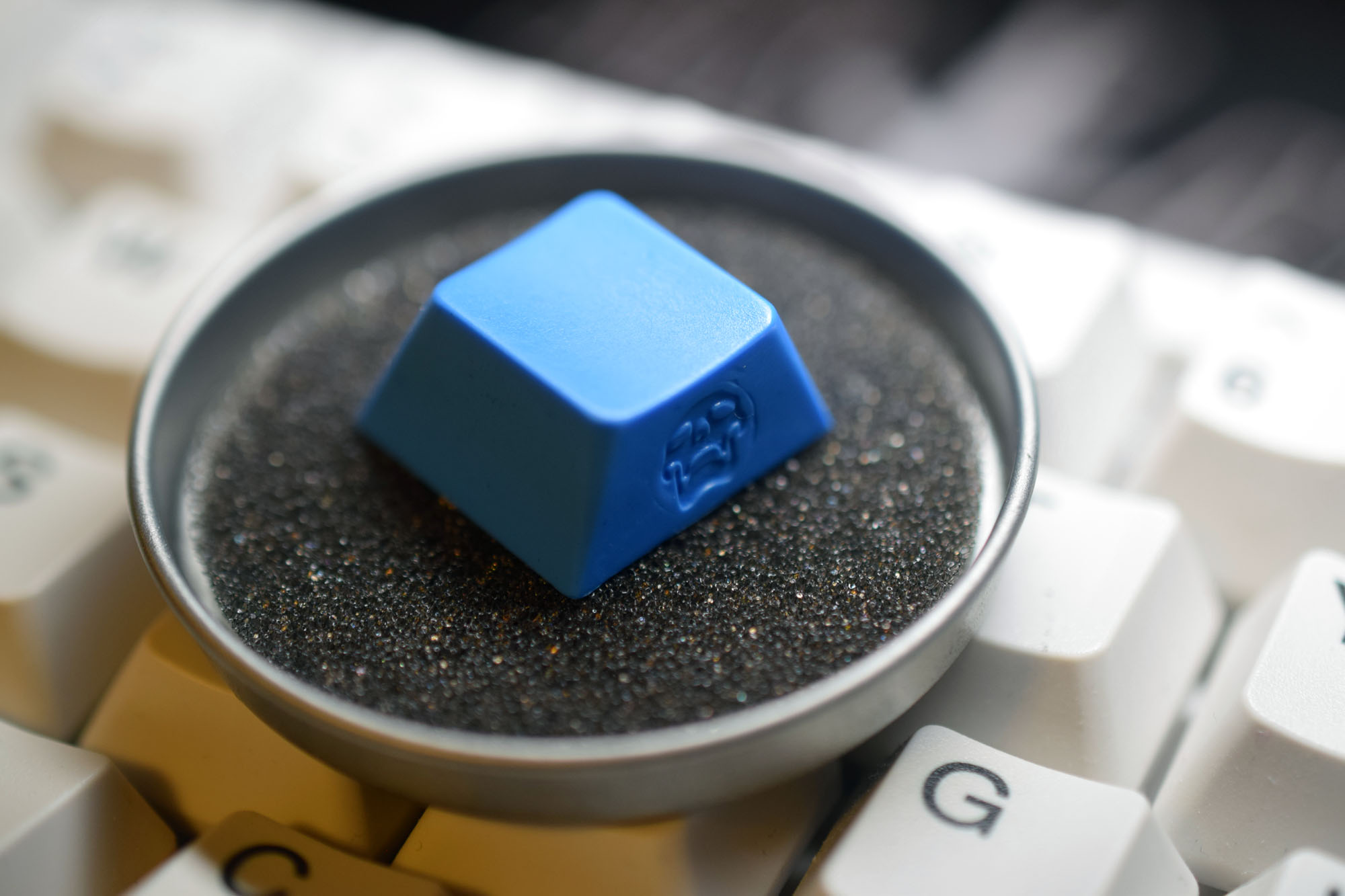 This is a small piece of activity from Hipsterpunks and I have to say it is one of the nicest caps I have seen. Similar to the recent Brocaps with the stamp in the back. From the photos it seems flawless. I’m not sure if these are for production or what but it would be nice to see more in the future. If you haven’t listened to his interview make sure you do, it is very interesting. <h2>Voidward: 3d Printed Skulls</h2> 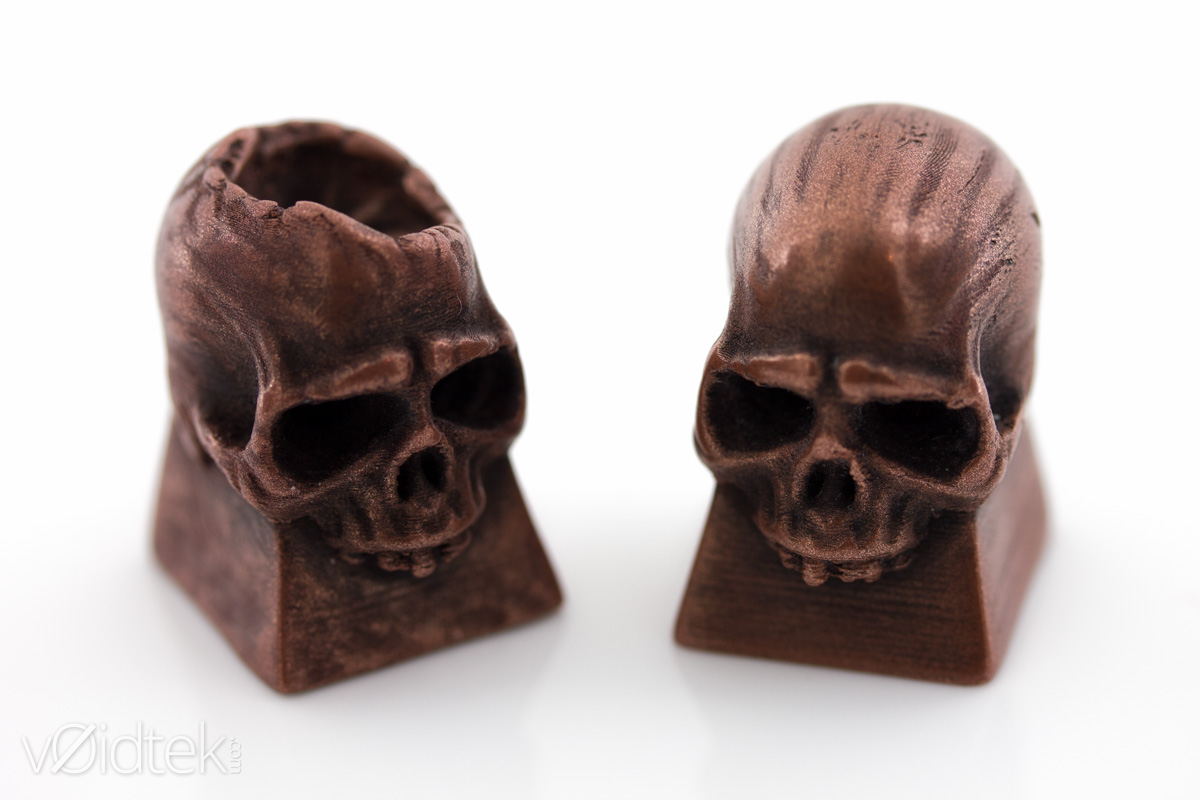 With the first skull iteration over 2 months ago. You are now able to buy these 3d printed skulls. There are 18 different colours available all of which come in two versions: normal and broken. There is one special version which is 3d printed copper. They all cost $15 apart from the copper version that costs $40. They aren’t quite to my taste. But I do admire the effort. You can get them at https://v0idtek.storenvy.com/ <a name=”koalatk”<h2>Koala-T-Kaps: Meowcaps</h2></a> 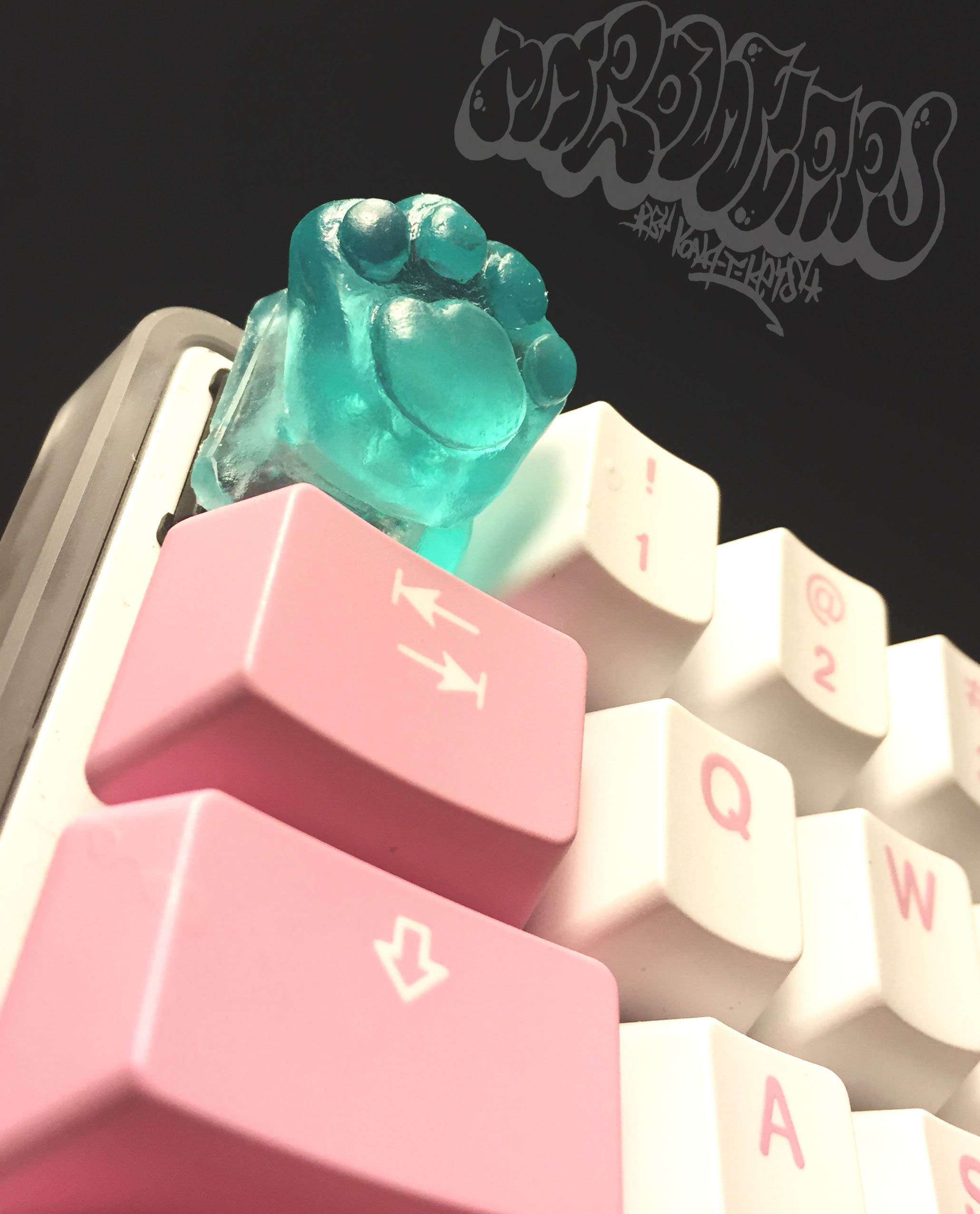 Koala-T-Kaps alongside kudos_and_godspeed has entered the keycap scene as well. Again this is a very good looking keycap. From the image available there appear to be no blemishes or scuffs. This looks like a well casted keycap. Koala-T-Kaps definitely has a promising future.

That’s all for this month. Sorry if I missed anyone. Honourable mention goes to Defect for their watermelon keycap.
I am going to try and make this a monthly feature because the sheer number of people making caps. Keep doing what your doing!

As pointed out by ripster I managed to miss a couple of people. But I think it is necessary that I include K3KC or K3Y as they now might be known. Because this is their first really original keycap design. They have made blanks before but even these have been criticized as knock offs.

These are the first original designs from K3Y and it is quite impressive. The keycap is more impressive on first glance. It does seem to have a reasonable level of detail which I’m sure is quite hard to produce. If anything this does show that K3Y does have some ability other than casting others caps. There are both Topre and MX versions available the sale starts on the 2nd of April the countdown clock is here.