There was quite a lot of happenings this month in keycaps. Least of all the keycap convergence of August the 28th. I hope to cover all that happened.

A small sale was held 26th. This completely passed me by like usual, as it was not one held on [CTRL]ALT I only managed to catch the notification about winners being announced. The sale was for textured MX escapes.

As well as this sale, Bro has been teasing the upcoming designs throughout the month. The designs shown were the new Reaper:

Although it is intricately designed and shows talent in sculpting, I still prefer the original Reaper.

The other design shown is a new one. The Cherokey:

Shown with a very nice cross section, that shows just how well made Brocaps are made. To stay up-to-date with Bro I suggest following him on Twitter, as this seems to be where the most new photos are posted.

I tried to come up with a decent sounding name for the sudden event of keycap sales on the 28th. This was the best I came up with.

This was the first official KatzenKinder sale in a while. Small sales were sporadically placed on mechmarket but this was a mega sale with a new design. Previously unnamed, the new design is now Monkey King. 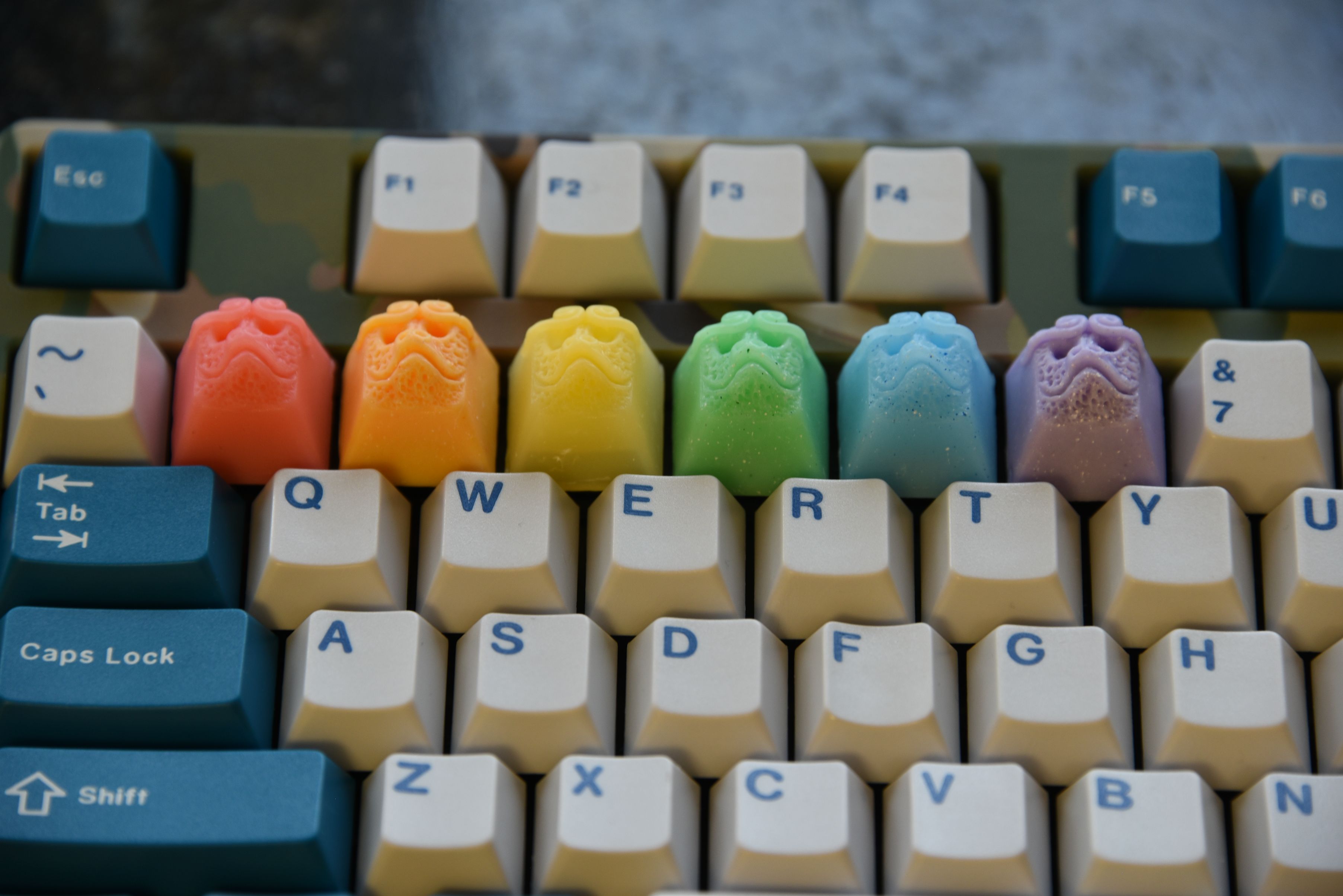 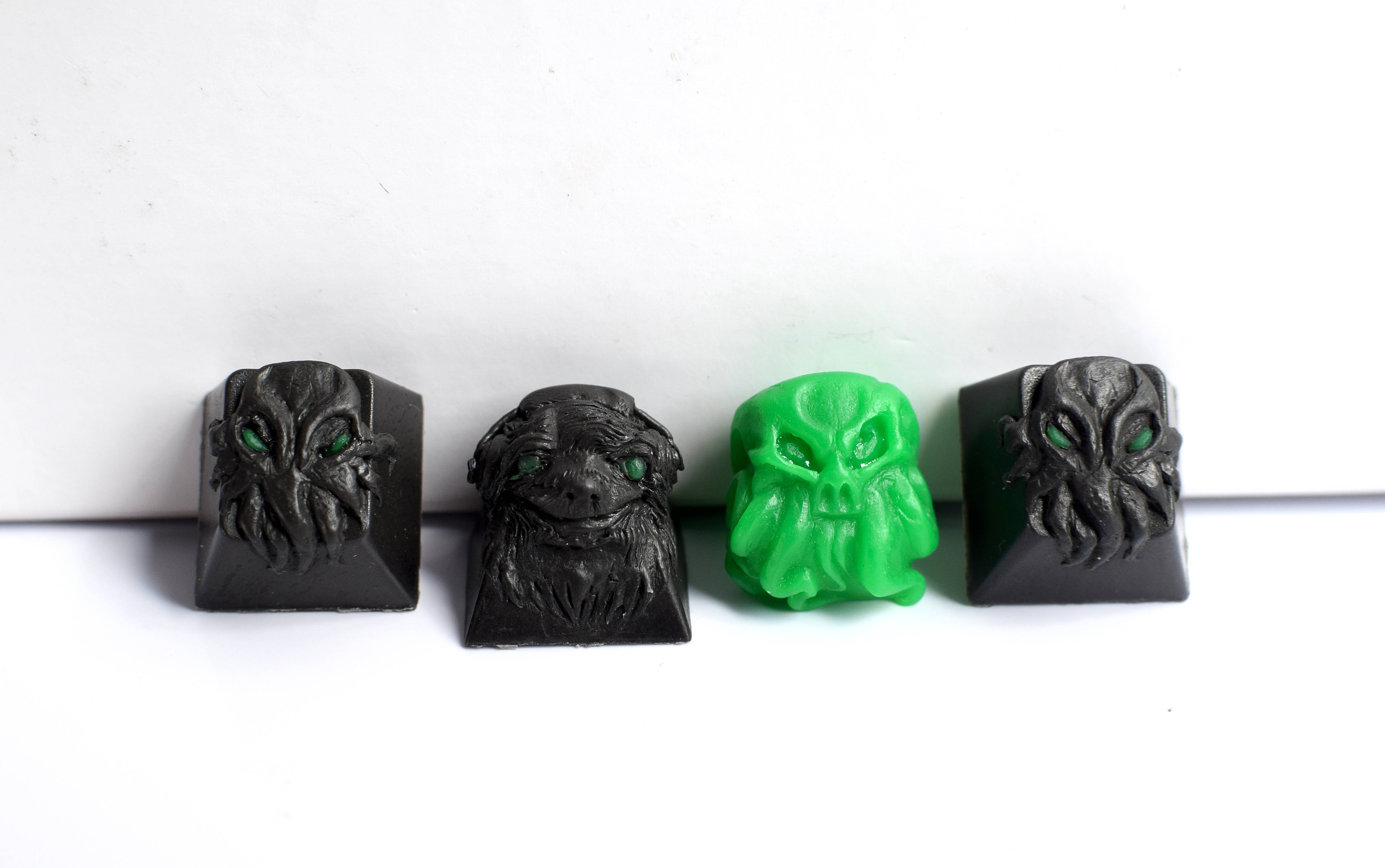 Binge also had a sale on the 28th. This took place on his site and was titled “50 Shades of Green” and for obvious reasons featured a menagerie of different green caps. The excitement quickly overran the site which resulted in tumultuous checkout. Despite the troubles, the site did become usable and everything quickly sold out. Needless to say I did not get any. This was a good sale and the keycaps look awesome, Binge is certainly a maker to admire.

After the sale, Binge also released photos of the exclusive Zealio themed bingecaps. 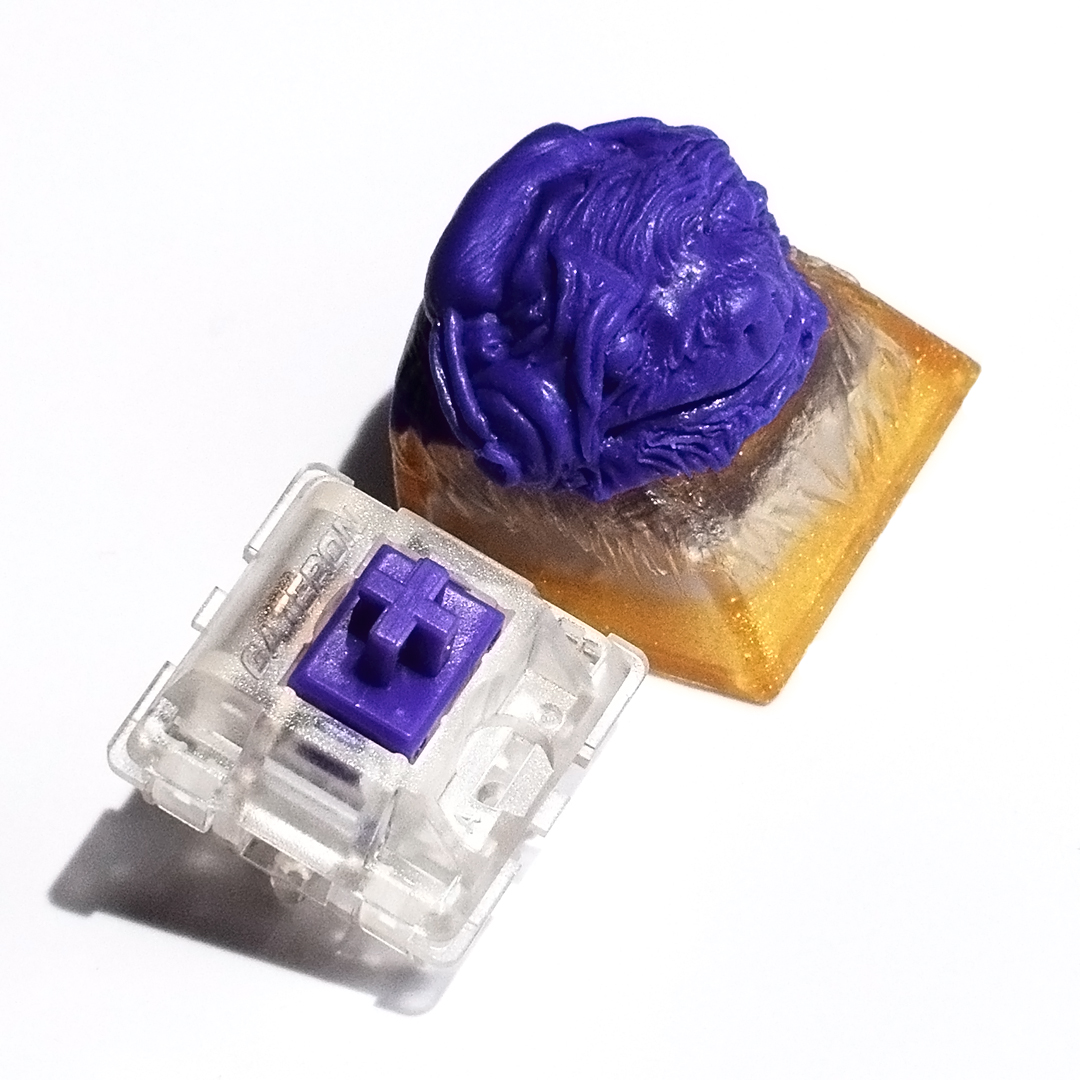 To get a chance of winning this keycap you have to purchase some zealios. This is a good GB to support even without the Binge incentive as it is a keyboard community first. 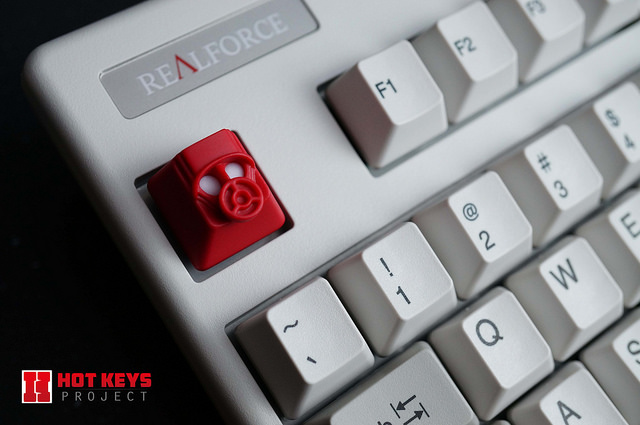 Although not a rushed sale it also began on the 28th. Included in this sale are:

From this sale the red G2 with white eyes is my favourite. These really are nicely made and the colours look fantastic. I might finally have to give in to see if the photos do them justice.
This was the August sale so it ended today the 1st of September. I missed the boat on this one. 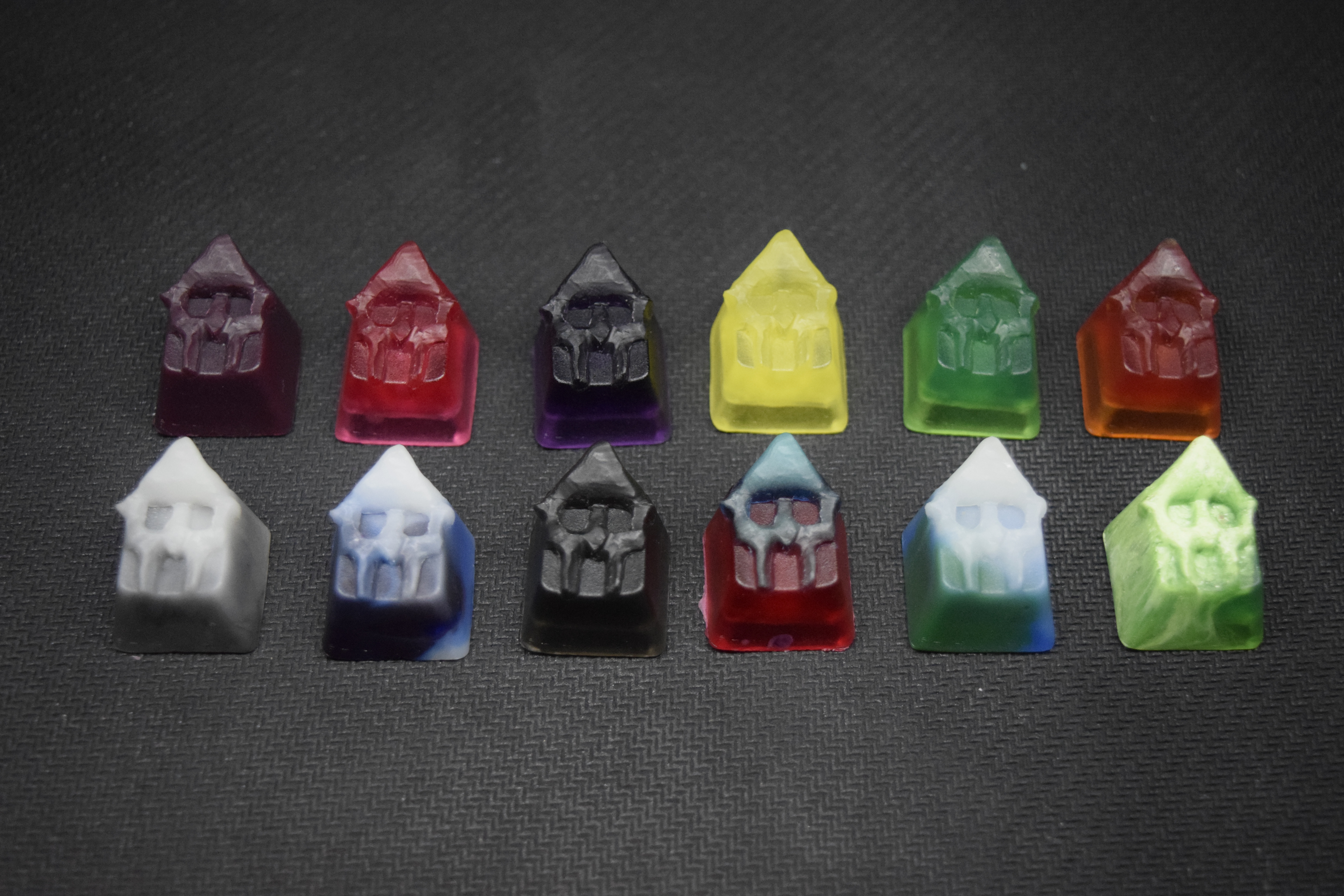 The fourth member in the keycap convergence mega event. The sale included:

It is cool to see some more custom spacebars and Doom Cap’s patterns are like no other’s. Some caps are still available so get some while you can. 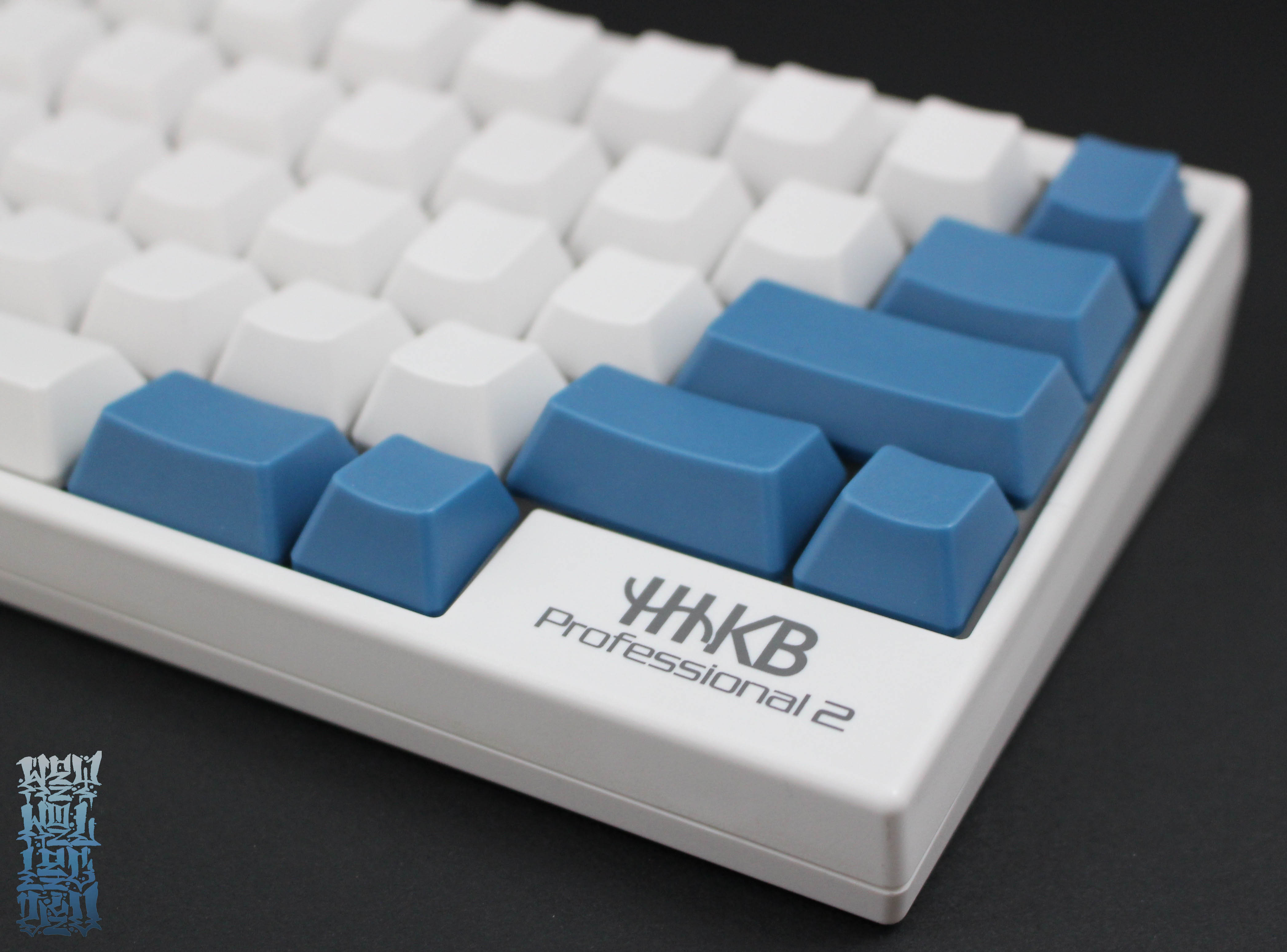 I am referring to KeyKollectiv as a Kollectiv as they are definitely onto bigger things. KeyKollectiv came out of nowhere and completely stepped up their keycap operation. They offered complete modifier sets for the HHKB, Realforce and FC660C. There was an incredible amount of choice on offer. You were able to buy a single colour set or customise your own and choose as many colours as possible. Because of the large scale, these are all made to order. This is more similar to how Martin of HKP runs his sales. Again because of how large scale this was, it was limited to 15 orders, so if you didn’t get in just wait for the future.
A bonus boombox keycap is also being included in this sale. 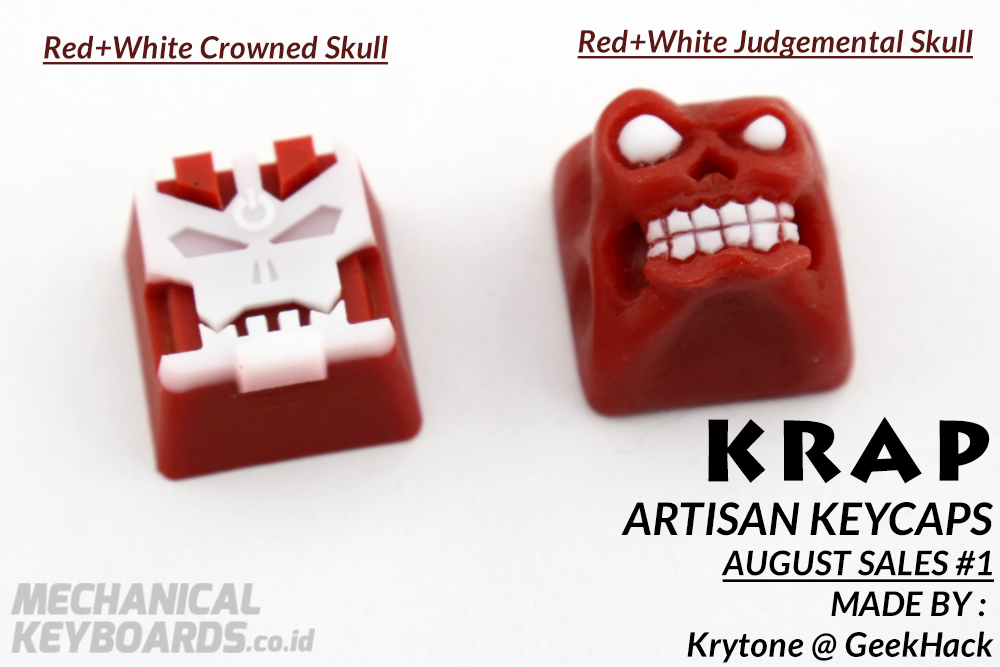 I thought the red and white looked stunning and I am ashamed to have missed out. This sold out quite quickly and new colours are available. See here for what’s currently left. 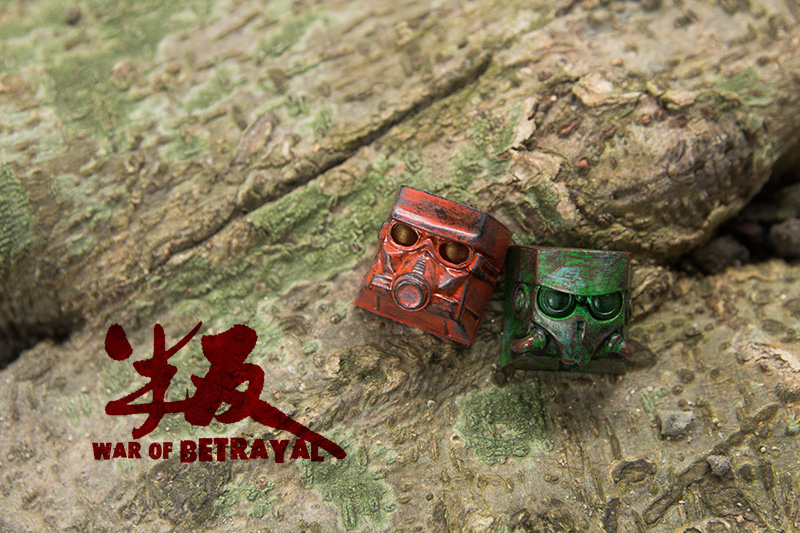 Whilst the mega sale happened you also had the opportunity to get some WoB caps. I believe this is the second sale featuring two new designs. This sale started on the 23rd and should run for one week, but the sale form is still up. So I suggest getting in while you can. These are another example of very high quality and they come in some packaging that I would very much enjoy.

From the interesting design of Goblin Goyle last month, retro created an almost successful cast of the design. Find it here. I think the colour works really well here, even if the underside is not perfect.

Retro then announced the retrobrite series: 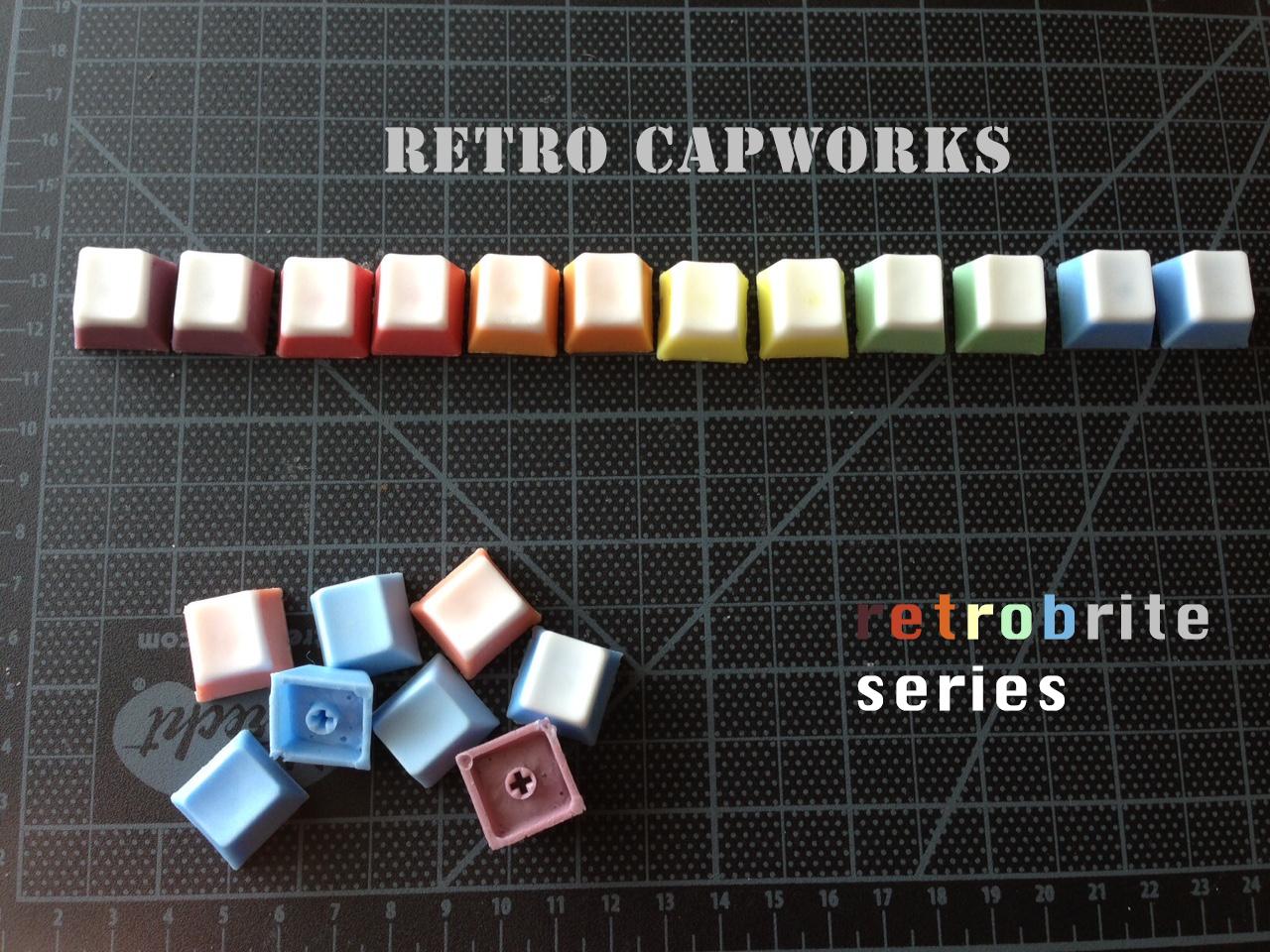 These look incredibly nice and I would love to purchase them as they are.

Zorberema of ZorbCaps had their first successful sale on August the 22nd. It featured two designs: the templar and the demonic templar. I think these have a nice hand finished look, and I’m also a fan of how the designs and colourways are very limited. I like where this is going and am interested in the future.

They also showed another new design “Golem”. I like this design but prefer some harsher colour contrast. 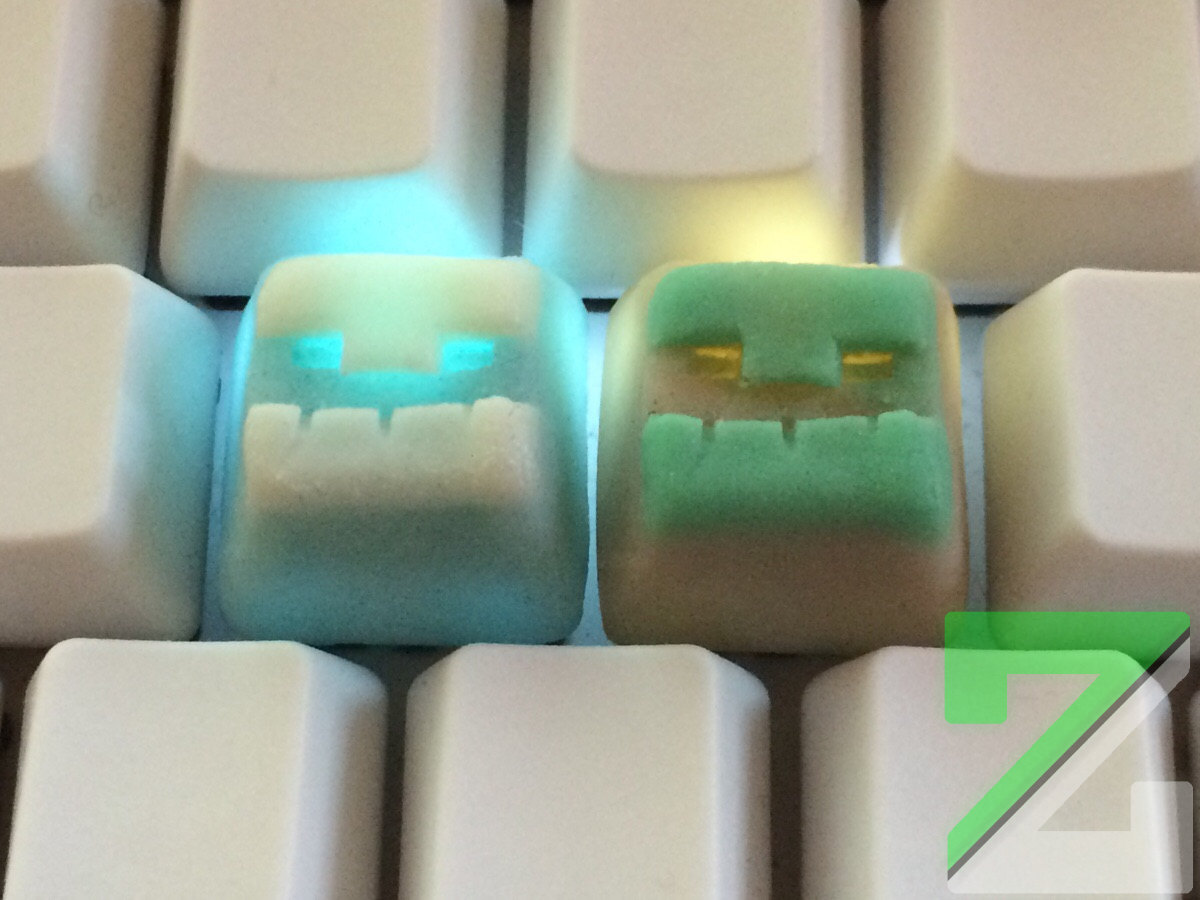 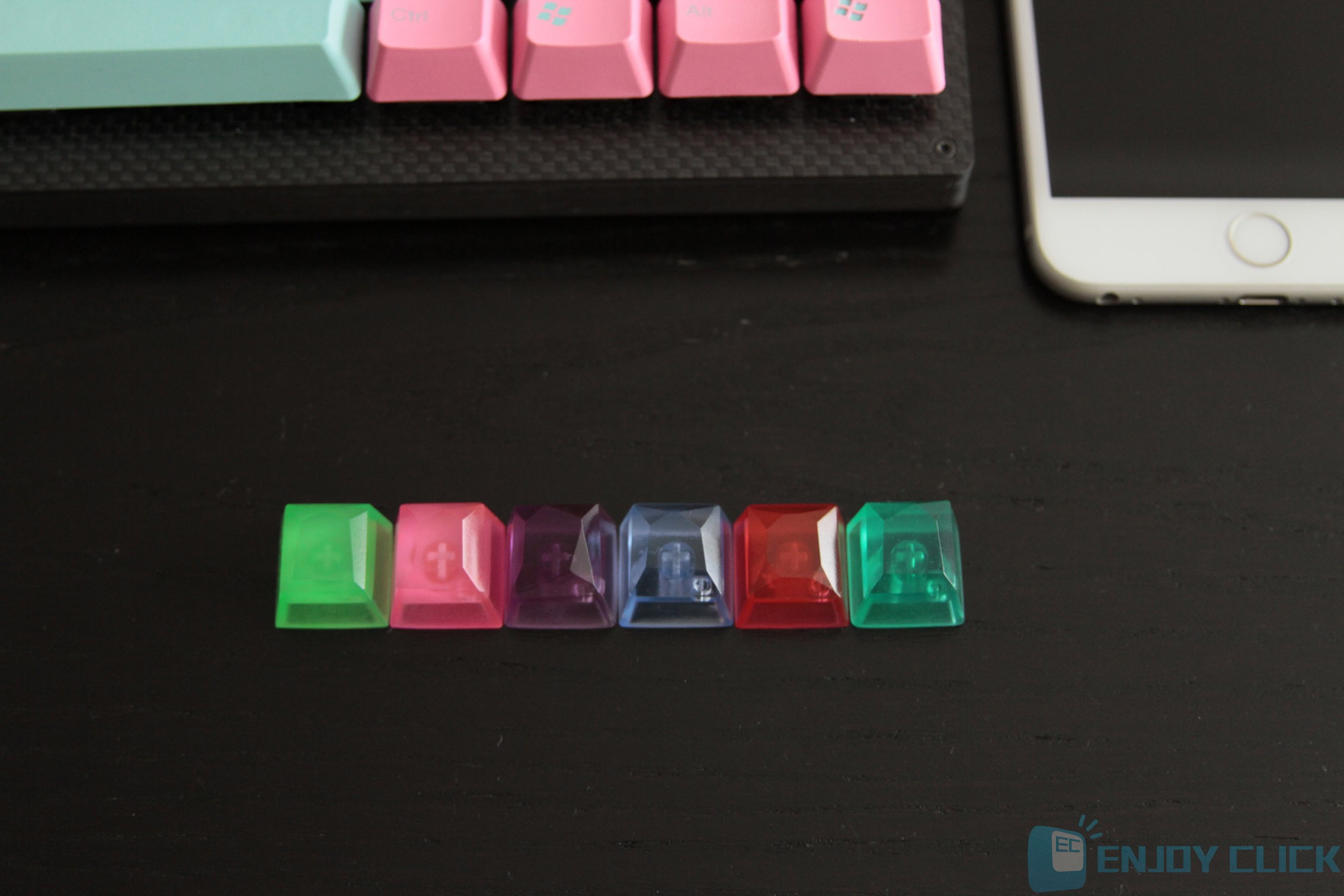 The Gen.s groupbuy has ended so sorry if you missed out. This was for the very attractive looking gem keycaps as well as the daft punk themed keycaps.

I was going to include this in last month’s edition, but it was a late acquisition, so I thought it would get better exposure this month. This is the Terminator: 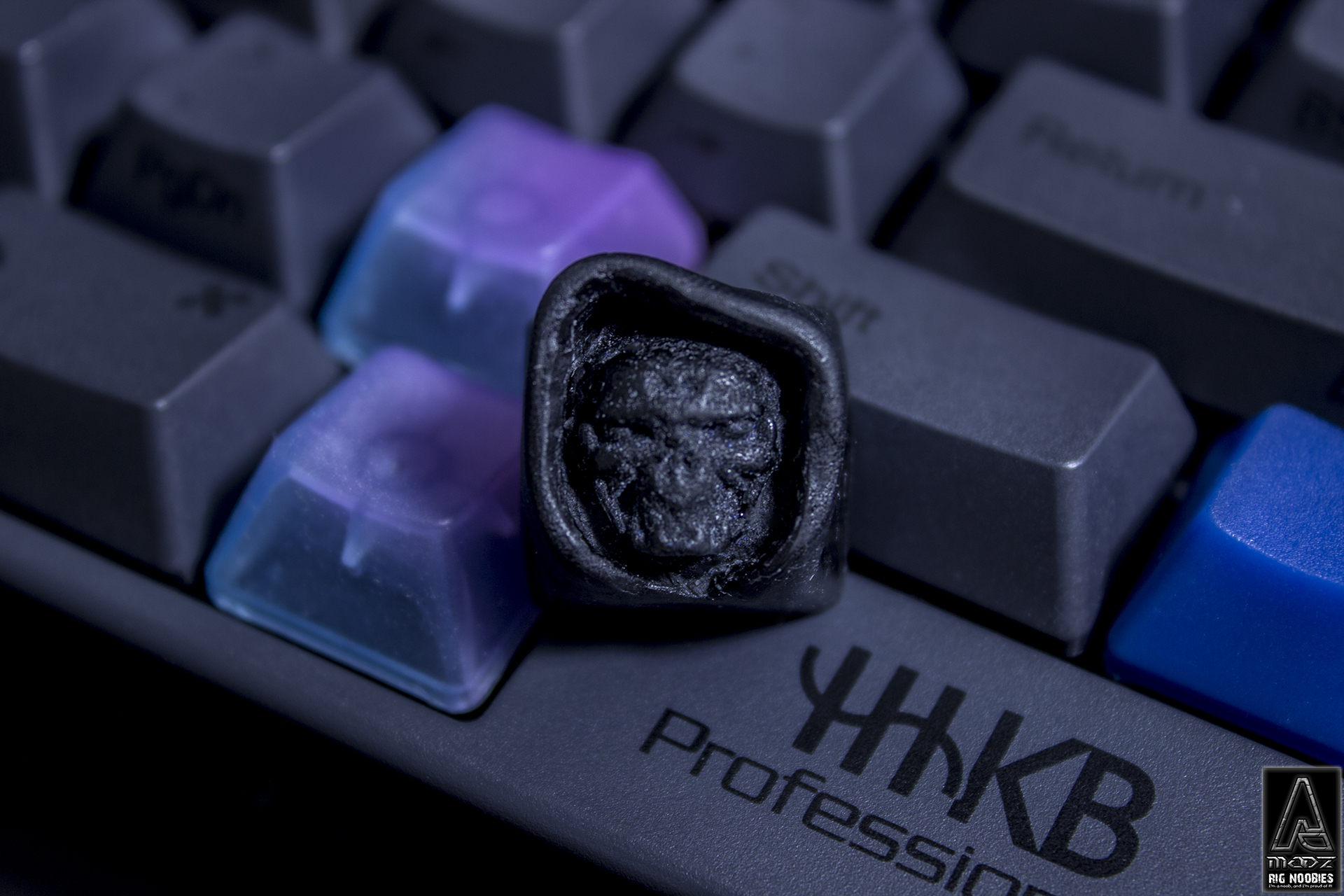 I really like the look of Adamski’s caps. The texture seems to perfectly capture the style and everything it’s trying to convey. I just think these caps work really well. 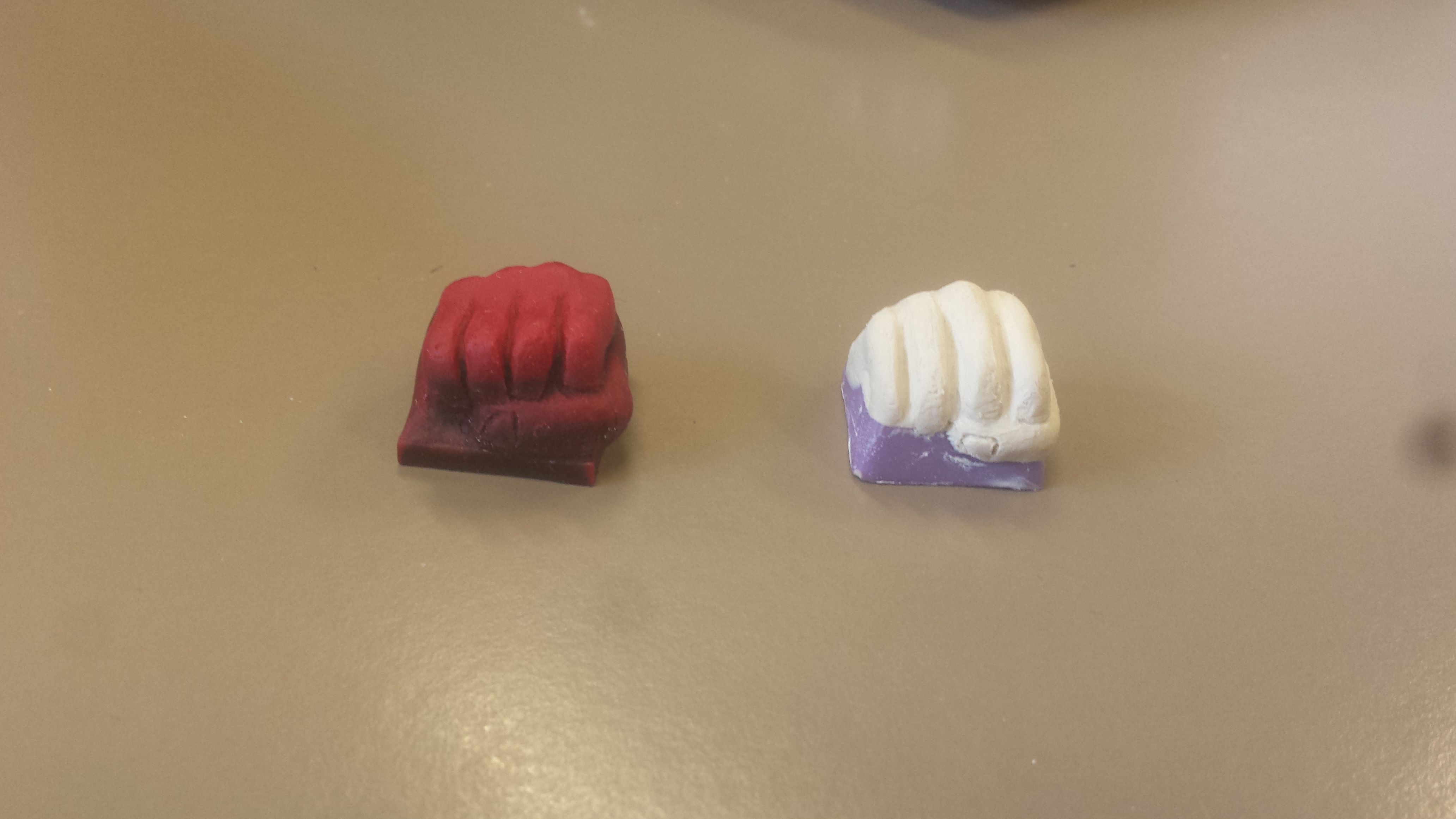 Previously known for the great beer caps. WinterWinds has now created a quite awesome fist cap. The red one is certainly my favourite here. Although they said, the thumb sticks out too much which hinders the cap from depressing. So the future ones will be better.
Keep it up WinterWinds I like what you’re doing.

I haven’t seen much from V0idtek recently, but it appears I have missed a couple of new designs. The first of which is the “Doom Guy” keycap which is something I haven’t quite seen done before in keycap form. I’m not a huge fan of doom, but this is an impressive keycap. 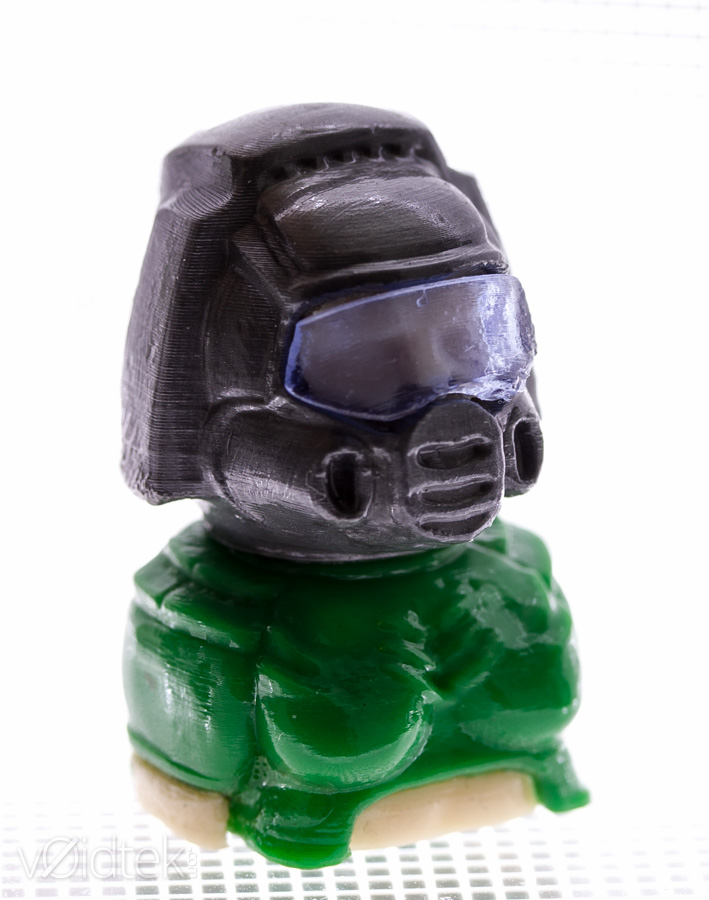 The next is a “Radioactive Barrel”. This looks great on a backlit keycap. 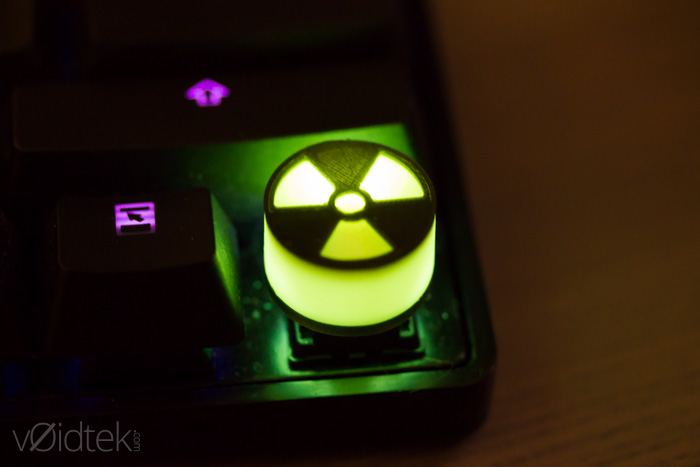 As well as new designs there are more skull colours. My favourite of which is the Deep Indigo. 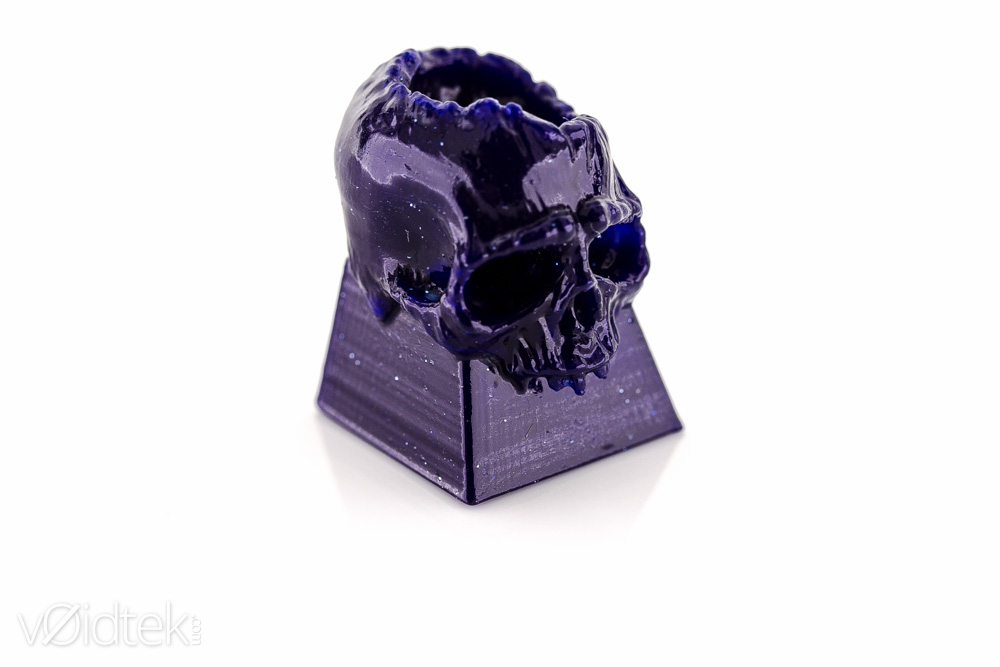 A small update to KappaKapps. The Lejon: 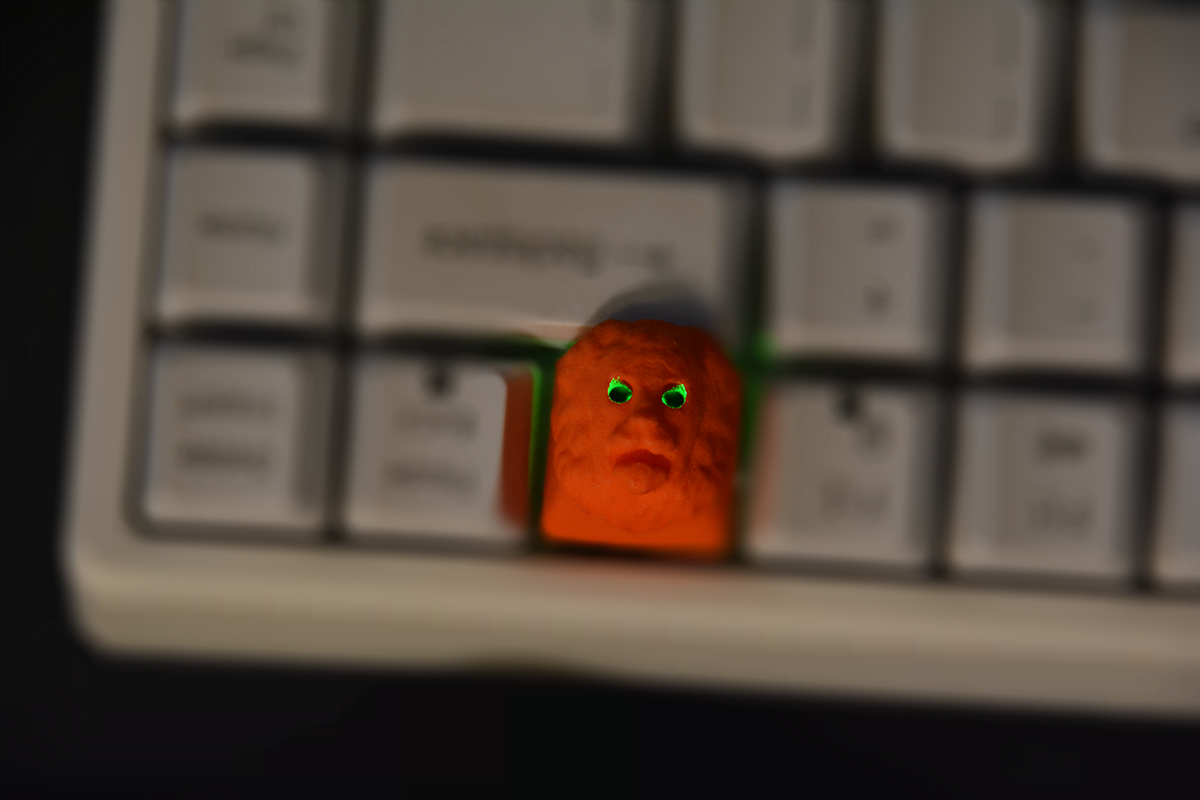 Flehrad is someone who keeps creating new designs. I become more impressed with each one. I think the most interesting is this ship: 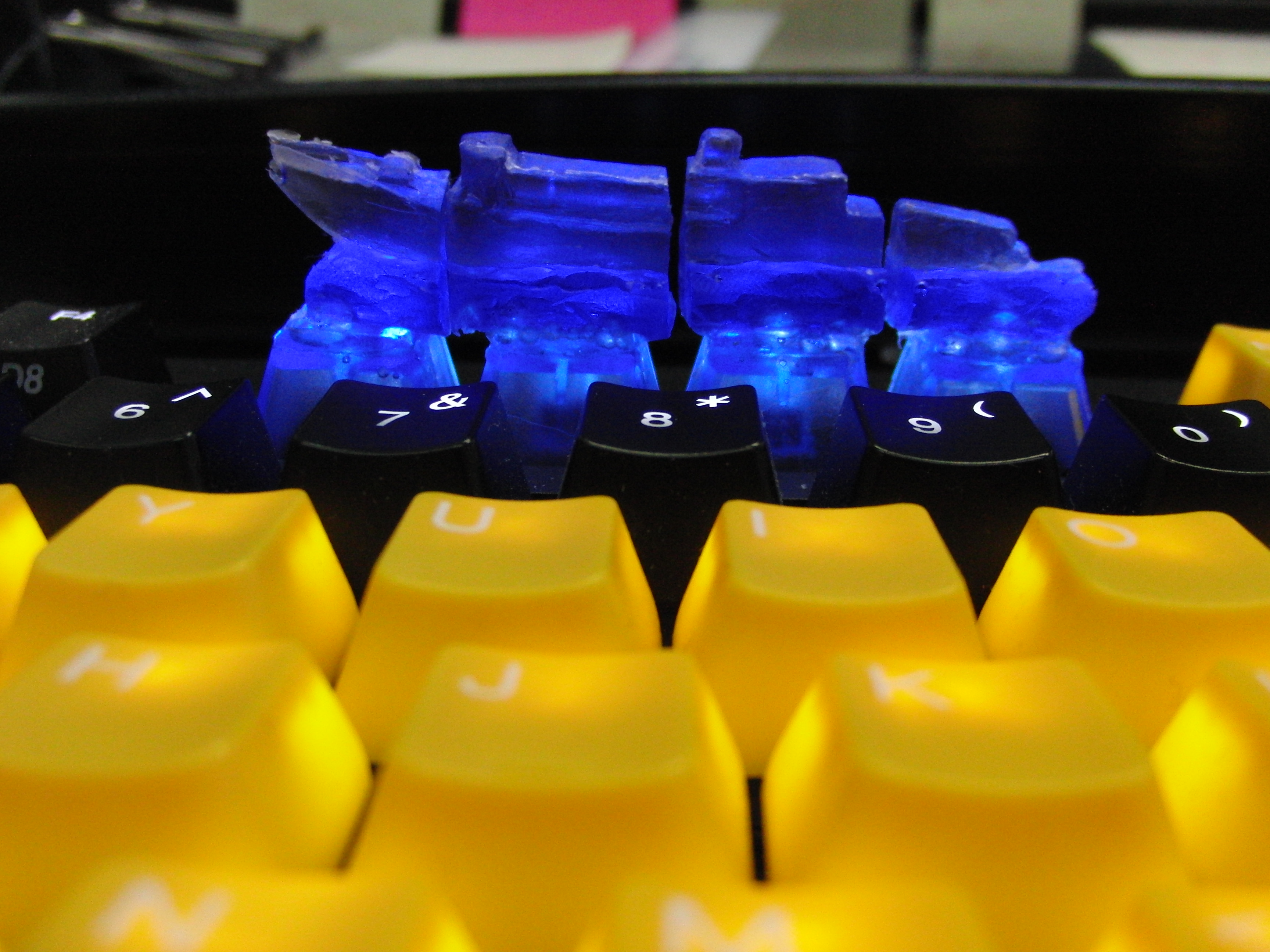 As I have never seen such an interesting ensemble keycap set. It all seems to work very well together and especially good with backlighting. I suggest you have a look at some of their other designs as there is some definite progress from last month. Just a bit too many to list through. Keep up the good work. 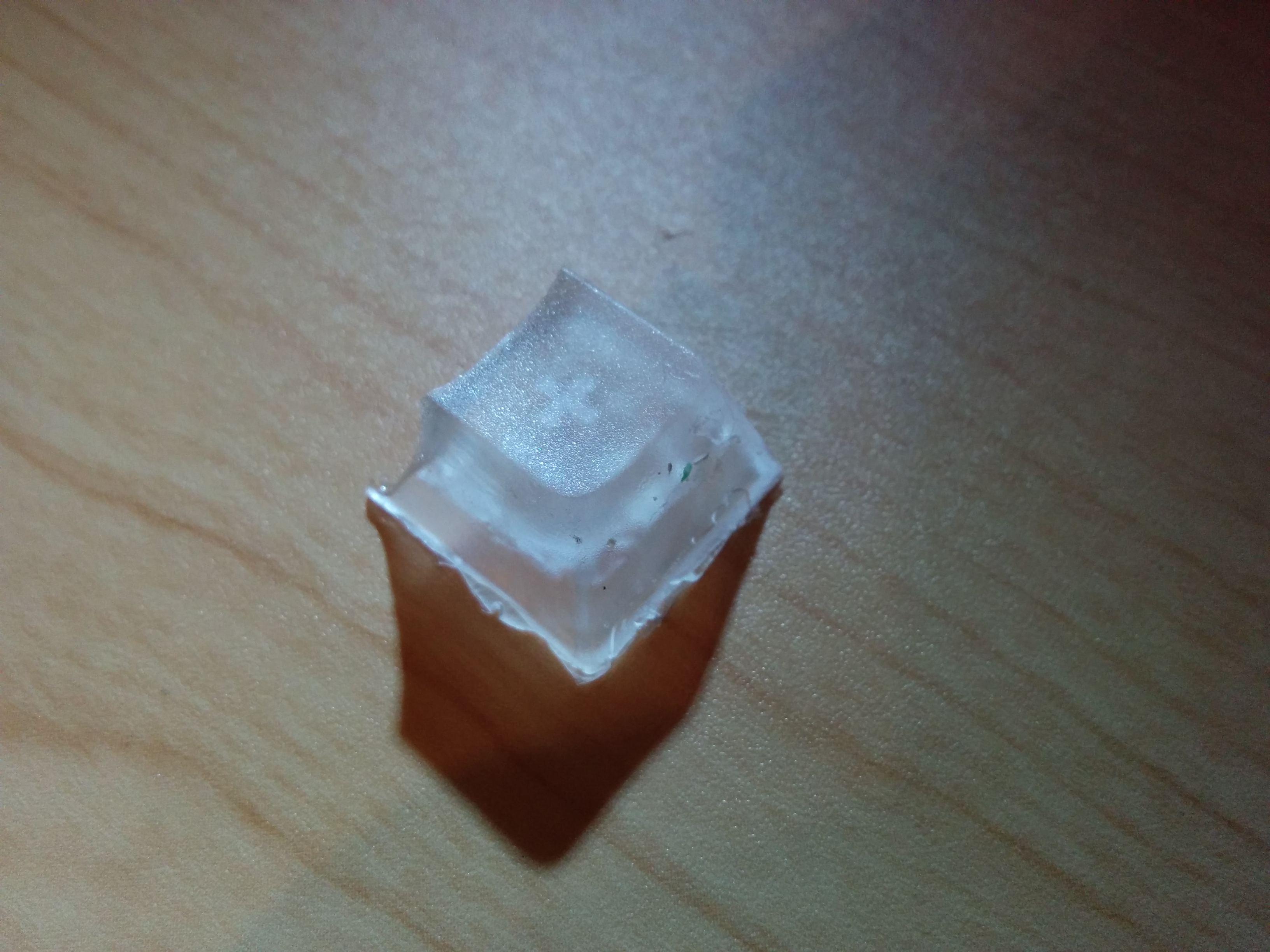 Another new person, with a valiant attempt at keycap casting. You might not be too impressed now, but we will see what happens next month.

This is another newcomer with a duo keycap project. Between the user Temence and Moshimalloe they are Marshmallow and Mischief. But do note this project is currently on hold. Some promising sculpts were shown. I look forward to what this project may become. 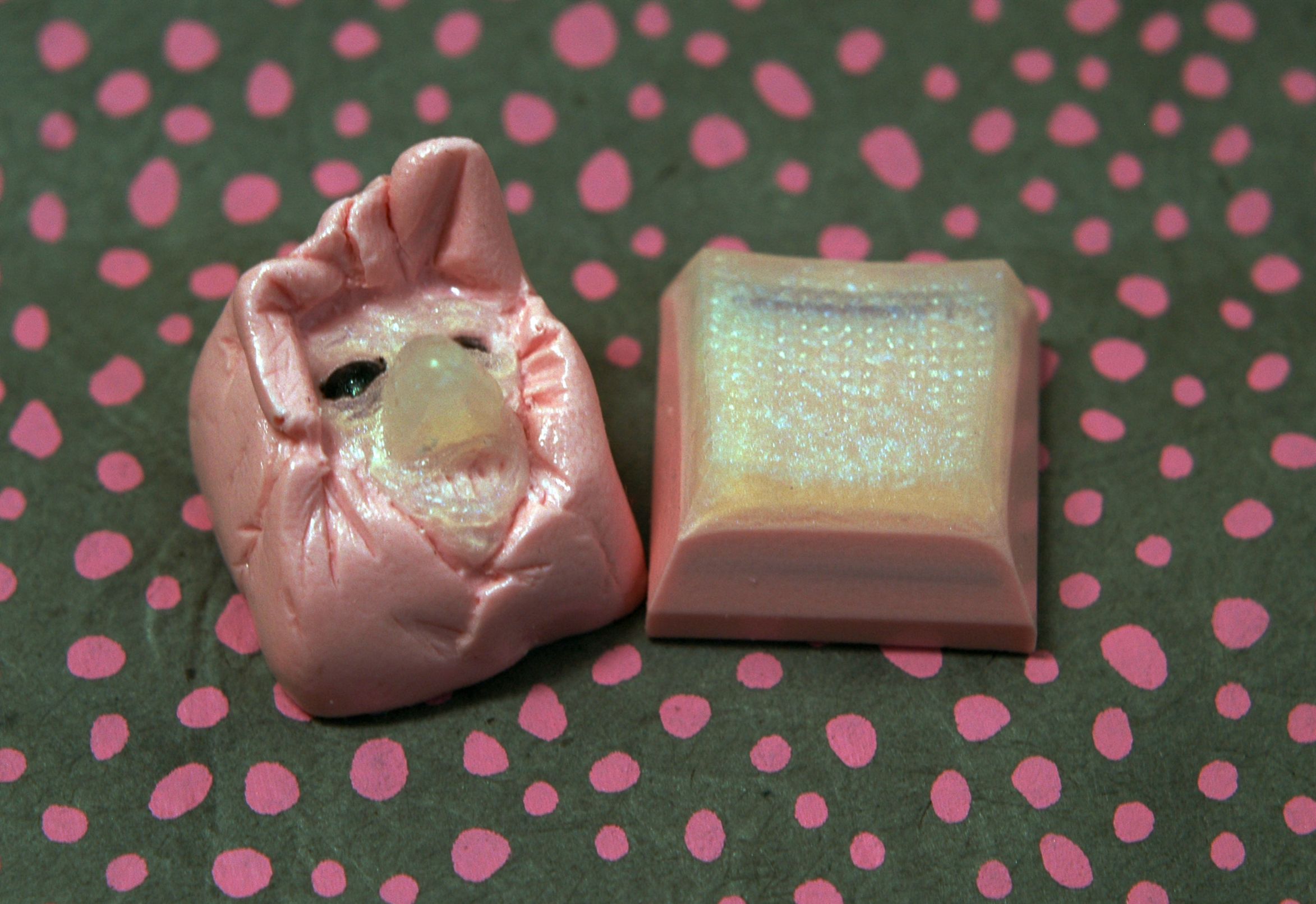 I managed to forget Nubbinator. The first event I missed was a sale. The pay-what-you-want Shadow Stalker and Fn sale. This was an interesting sale due to the fact it was a pay-what-you-want (minimum of $10) and there were some truly outlandish colour combinations. The design of the Fn I find interesting as it does not look like a standard Topre Fn. Not only the texture, which is admirable for the quality, but it has much harsher corners than you see on a stock Topre cap.
Interesting photos have also been posted in the “Post your Nubs Thread”. This photo in particular shows some very colourful Fn’s with a lot of different colours.