A Week With the Novatouch

My week with the Novatouch 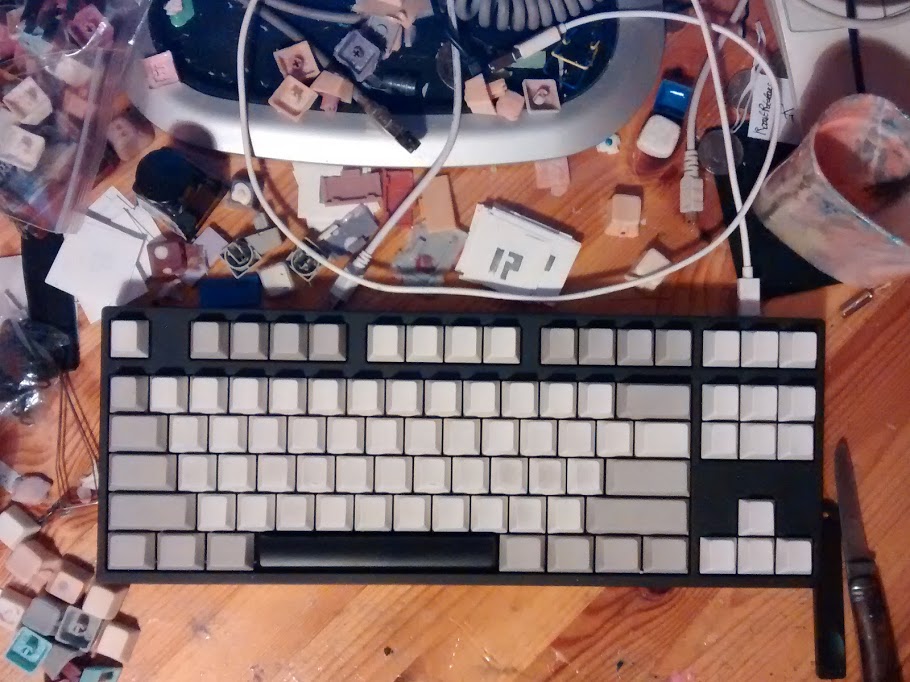 This week I participated in the Novatouch Community tour. I am always interested in trying new keyboards and the Novatouch covers a couple of my interests. It is a Topre board (I have only experienced the HHKB) but also a unique (ish) Topre board. This is because it has the Topre to MX sliders. These reasons make this an interesting keyboard all around. The fact that a keyboard that is this much of a niche exists is interesting enough.

I do what I always do with any keyboard and change the layout to how I want. This is colemak, with capslock as a dual-role modifier as ctrl/esc. These are options that are not given to you on the Novatouch but have to be done computer side. 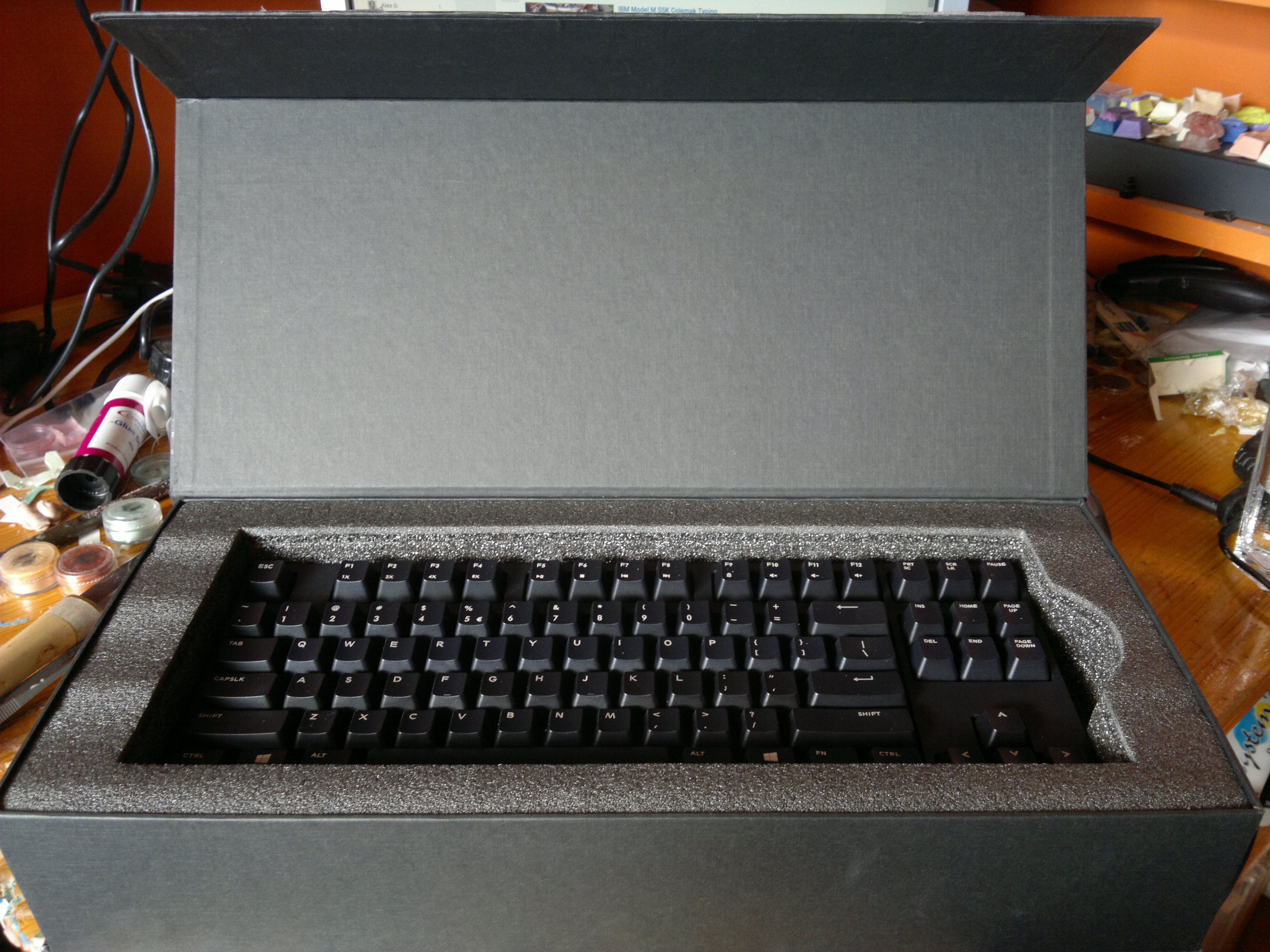 When opening the keyboard, I was pleasantly impressed with the packaging. It is not too exciting, but it has a magnetic seal on the box. So of course I was excited. I am a fan of packaging and this just got me interested in the keyboard.
The box contains:

The first thing I did was lift the Novatouch from the box. From this moment I was very impressed of how it felt in my hands. It has a really nice weight and nice matt finish. The only branding is on the back and the underside of the keyboard. The overall look of the keyboard is to my taste unless you see it from the backside. Where you have an unusual style change, with a strange line running across the board.

The included cable is a nice braided cable but is a 90° cable. This is not something I can utilise as it makes my cable setup just a little harder. However, I always have a good stock of cables so I am ready to connect keyboards. I used a standard white Micro USB that came with my Moto G. This worked fine as expected.

As soon as I started typing I immediately noticed I was typing faster than usual. This is one of those random events I can’t explain, I can in no way attribute the Novatouch to instantly improving my typing speed, but the feeling instantly clicked with how I type. My new found speed was pretty awesome, but this lasted around a couple of hours. From this typing session I had ascertained that it felt light. The thin ABS keycaps bounce with very little pressure. From a stock perspective, I found this a truly peculiar typing experience. It is 45g Topre, but it feels nothing like the HHKB. With all of this said, I really liked this at first.
The sound is the fist difference I noticed. It is plonky, hollow and light, The modifiers were the worst offenders. There is a real clatter on the upstroke. I quickly grew dissatisfied with how it felt. You can tell that it is Topre, because of its distinct feel, but it is still different. When it comes to keyboards it is all down to the person and what they like and how they like their switches to feel. The confused nature of this board contributes to the rift of people who think the Novatouch is great and those who don’t.

Regarding the Fn layer you get a few additional functions. Media controls, volume and the option to repeat keypresses. Everything works as you would expect. The volume and media keys are the standard scan codes that I had already configured in my WM so they worked perfectly.
The repeating functions had no use for me. I can’t think of any games that I play that require me to spam a certain key.

A Change of Keycaps

One thing I knew about the Novatouch was that the stock keycaps did not provide the optimum experience. With this in mind I was quick to change the keycaps. I started the first day on the stock ABS. Which is only fair, as these are what it comes with. I swiftly moved on during the second day. The only other keyset I have is the Gateron PBT blanks. I think these are good enough to see what the Novatouch could achieve with nicer keycaps. They were surprisingly easy to put on. The Novatouch stems feel a bit looser then a standard MX stem. However, I found this varied between slider. Some went on really easily and could slip off easily, whilst others were tight. When using the supplied keypuller, I noticed it to be a bit smaller than ones I have used in the past. This is to fit into the housing at the top row. But even with a smaller keypuller, getting the top row of keycaps out is a bit of a challenge. There is not a lot of room to get the wire around the keycap. Saying this, it was not a major struggle. Just frustrating.

My initial thoughts do not recognise this as making huge difference. It is a little less plonkier but I do not see it as a huge improvement. My experience with PBT keycaps is not that expansive. I have used SP DSA and now Gateron PBT. I would say both of those are of a good thickness. So I was disappointed that I did not find this to hugely change my experience. Once I had settled down and done a couple of typing tests I felt a little better about the Novatouch.

The next thing I tried was the o-rings. The first problem I encountered was putting these on. They slipped off the stems of the Gateron PBT so I had to place them on top of each slider and then carefully put the keycaps over them. This was tedious and did not always work.
After putting them all on, I was not enamoured with the new feel. It took me 10 minutes before I had to take them off. This was not a good addition to this keyboard.

The End of the Week

After typing on the Novatouch for a week, I kind of like it. The stock keycaps do not feel the best to type on. The Gateron PBT moderately improved my experience. After a couple of days I adjusted to the new feeling and adapted my typing to this quite well. The feeling is not the Topre feeling I know compared to my HHKB. It is most definitely Topre but different. The sliders really do sound “plonky”. But it is not entirely a bad thing. I like keyboards for the variety of different switch types that produce a different feeling, this is another.
Aesthetically I like the look, this is all I desire from a tenkeyless. Not a lot of excess body, and no fancy bevels. Even though the branding is minimal, the back does not really look great. The Fn layer does what you want but doesn’t really give you any options. No mapping of capslock or anything like that. Something that may annoy others is the lack of indicator lights. Capslock does not have an indicator light despite there being a space for it on the PCB. This does not bother me as I do not use capslock.

The Novatouch is a strange keyboard. It’s a great tenkeyless, but the feeling just isn’t that which I recognise as Topre. To enhance your experience the thicker keysets are needed. A landing pad mod would be a nice addition to this keyboard and reduce some noise. With a bit of tweaking I think this could be a very nice keyboard.

Thinking back on my week, I like this board. It took some adjusting and a new keyset. But once I got going I found I did enjoy typing on it. It is not the same and does not sound the same as my HHKB. But in its own category (as there are no others like it) it is a very nice keyboard.

typeracer Typing Data for the Week 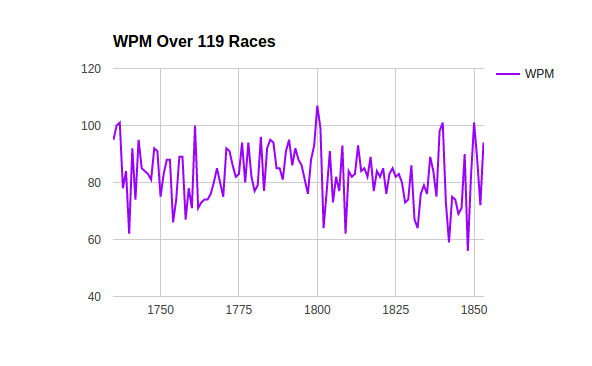