I managed to get into the Alpha sale for the Lootkeys Project. This is a keycap project by Whizzard. There were a couple of different designs available, and I opted for the Ice Cube and an Abductor but I only managed to win an ice cube. These turned out to be the more popular designs available in the sale and were also available in larger numbers

What I received was much more exciting than I had anticipated. The packaging this single keycap came in was grandeur. Like no other keycap I have ever received. The first thing you will notice is the customised packaging. My box was labelled with my very own name. This is one of the things that set’s Lootkeys apart. 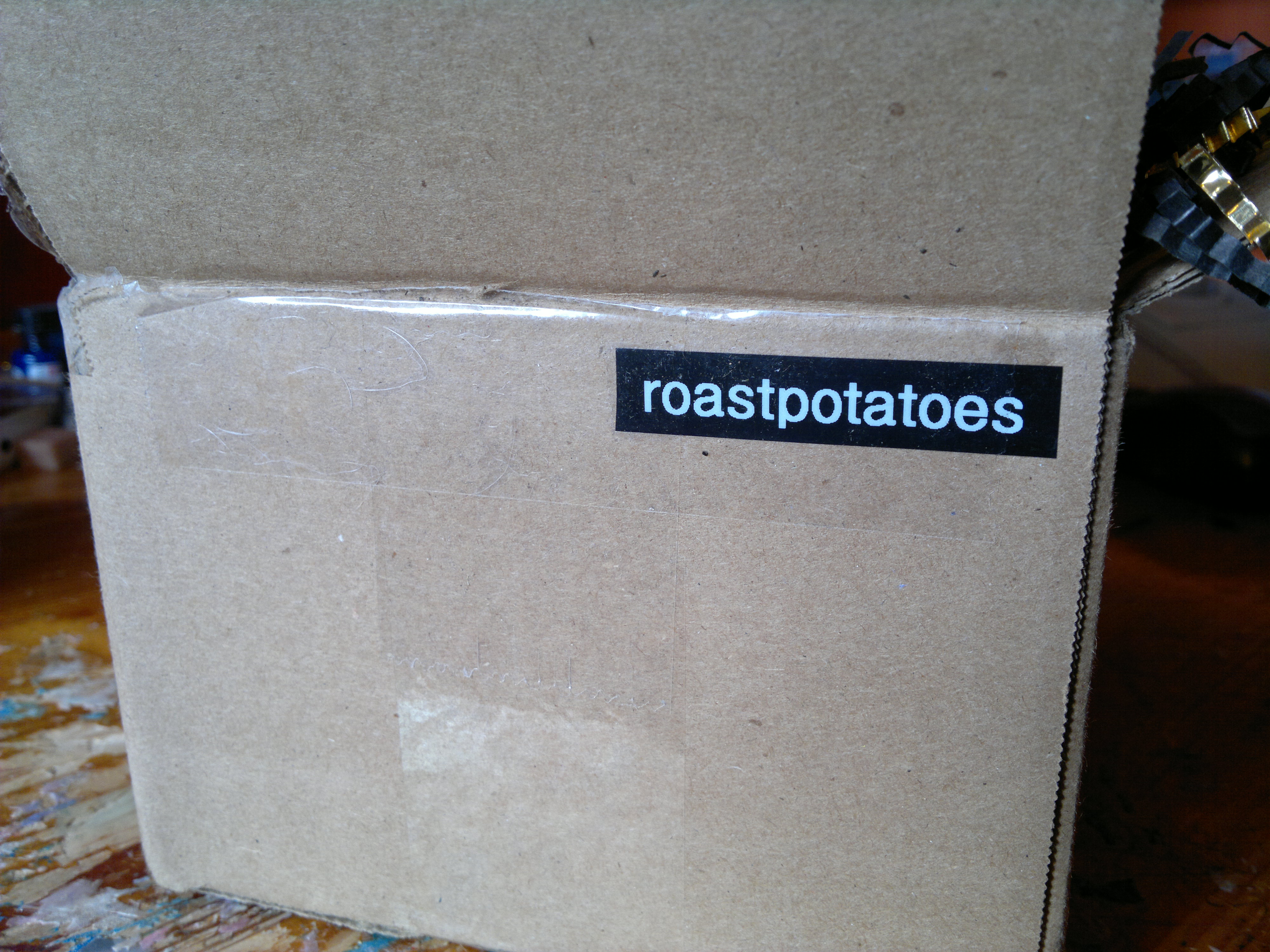 The next thing that will be abundant when you open the box is the unusual packing material. I’m not sure if Whizzard went to the trouble to make this himself but I wouldn’t say it is standard. 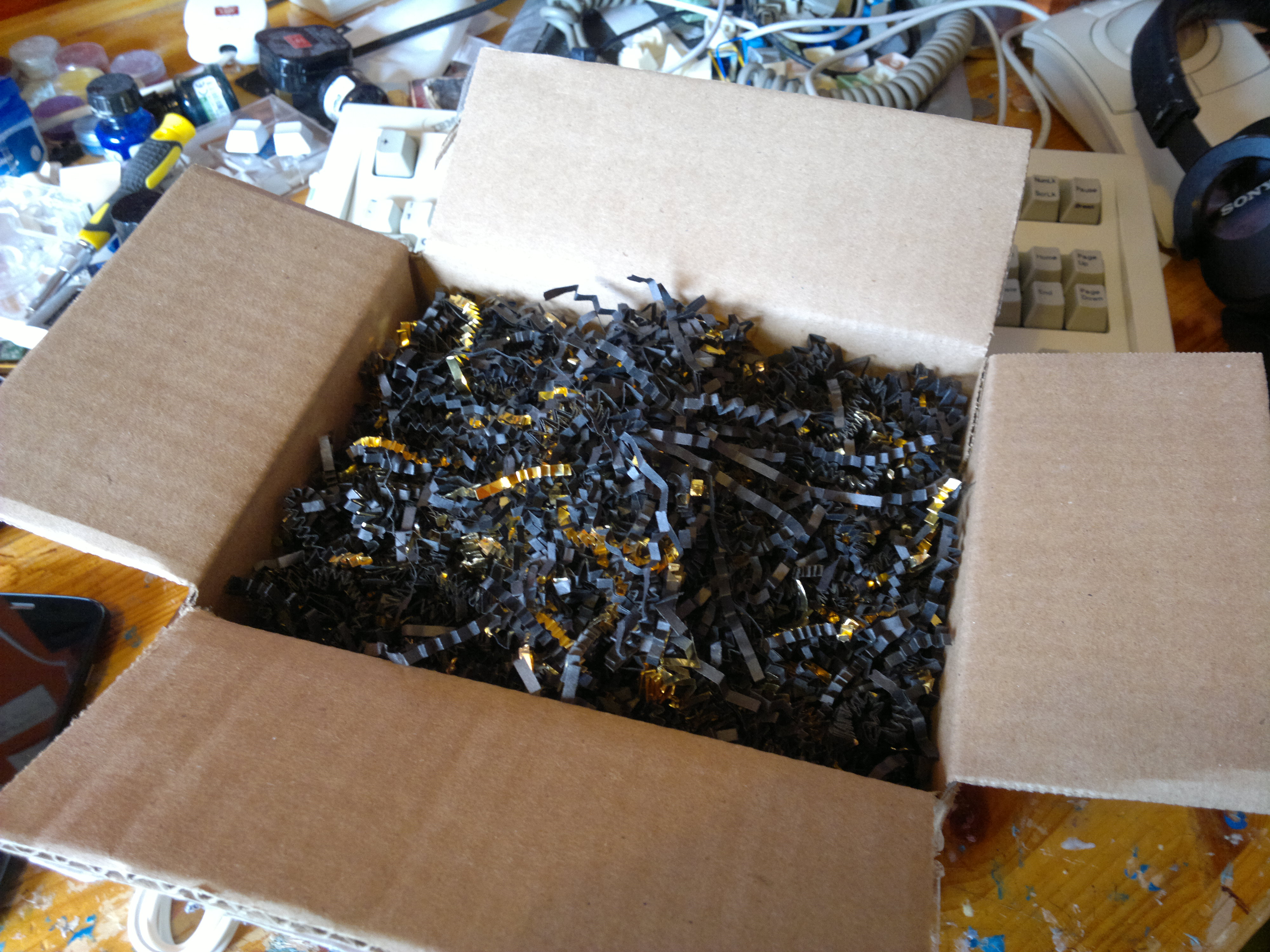 Buried in the center of the black and gold, I then found the box which contained my keycap. Alongside this I found my Lootkeys Keycard. This details the keycap and my Lootscore. Which I believe will be used in the future as a loyalty scheme or reward scheme of some sorts. However, at this point it is undecided. I also like that the card comes with the keycaps inception date.
The Lootkeys sticker on the front is a casual reminder of what you are doing. This is not a regular unpacking experience, this is a Lootkeys experience. 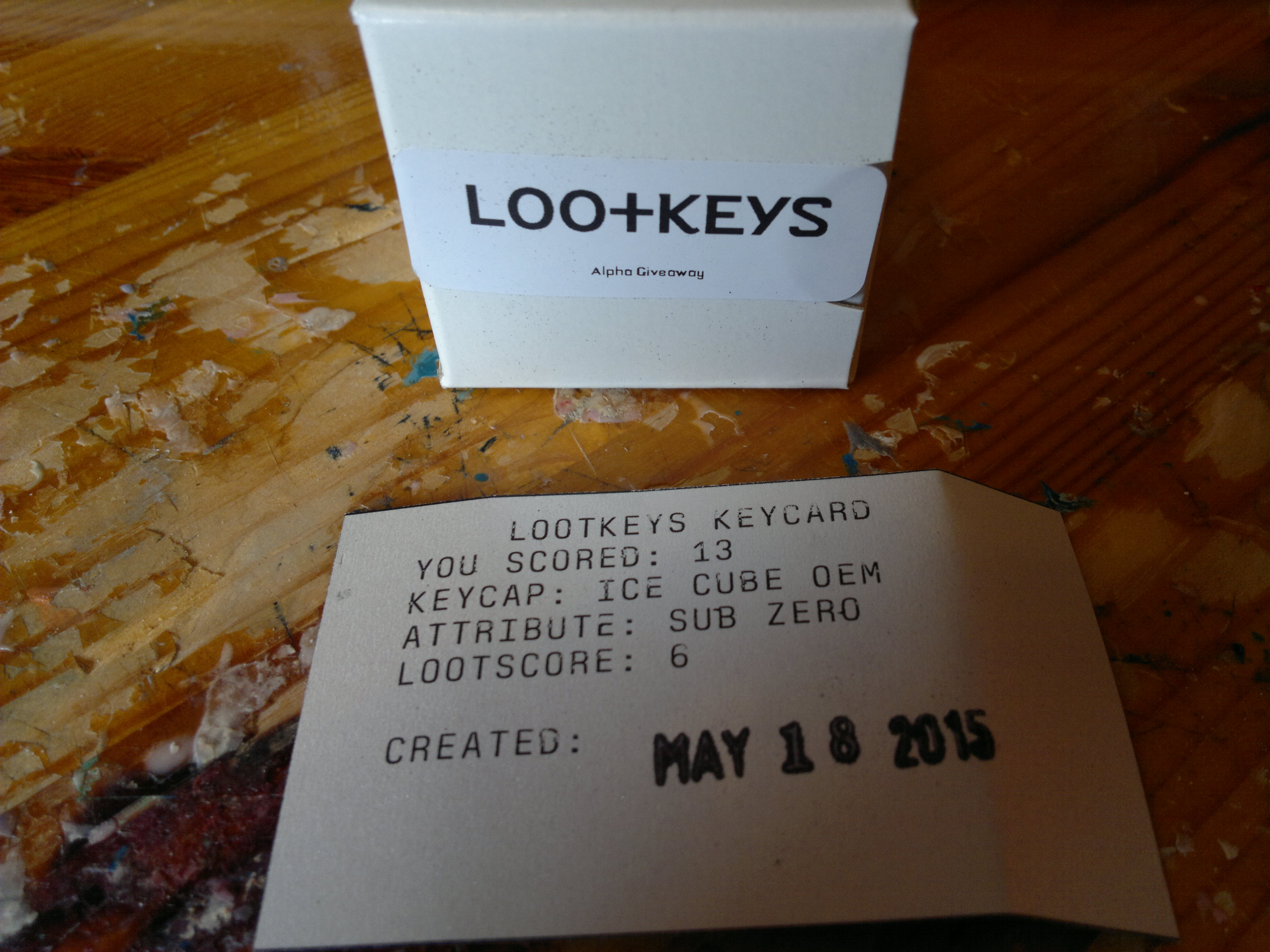 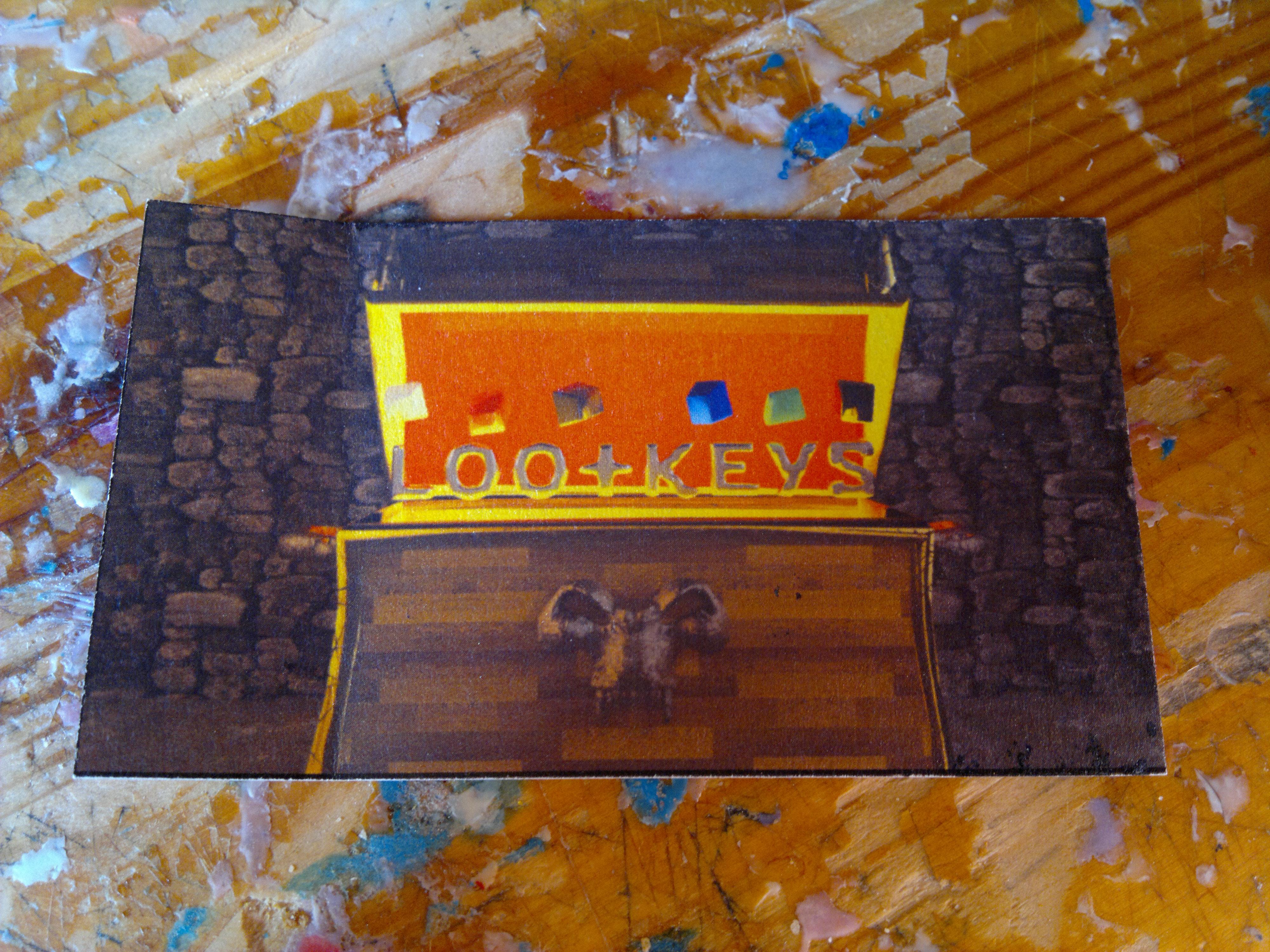 Inside the box was a bag. Yet another thing to open. I hope I am conveying that this was fun to open and I was quite excited throughout the unboxing. I found myself smiling all the way through. 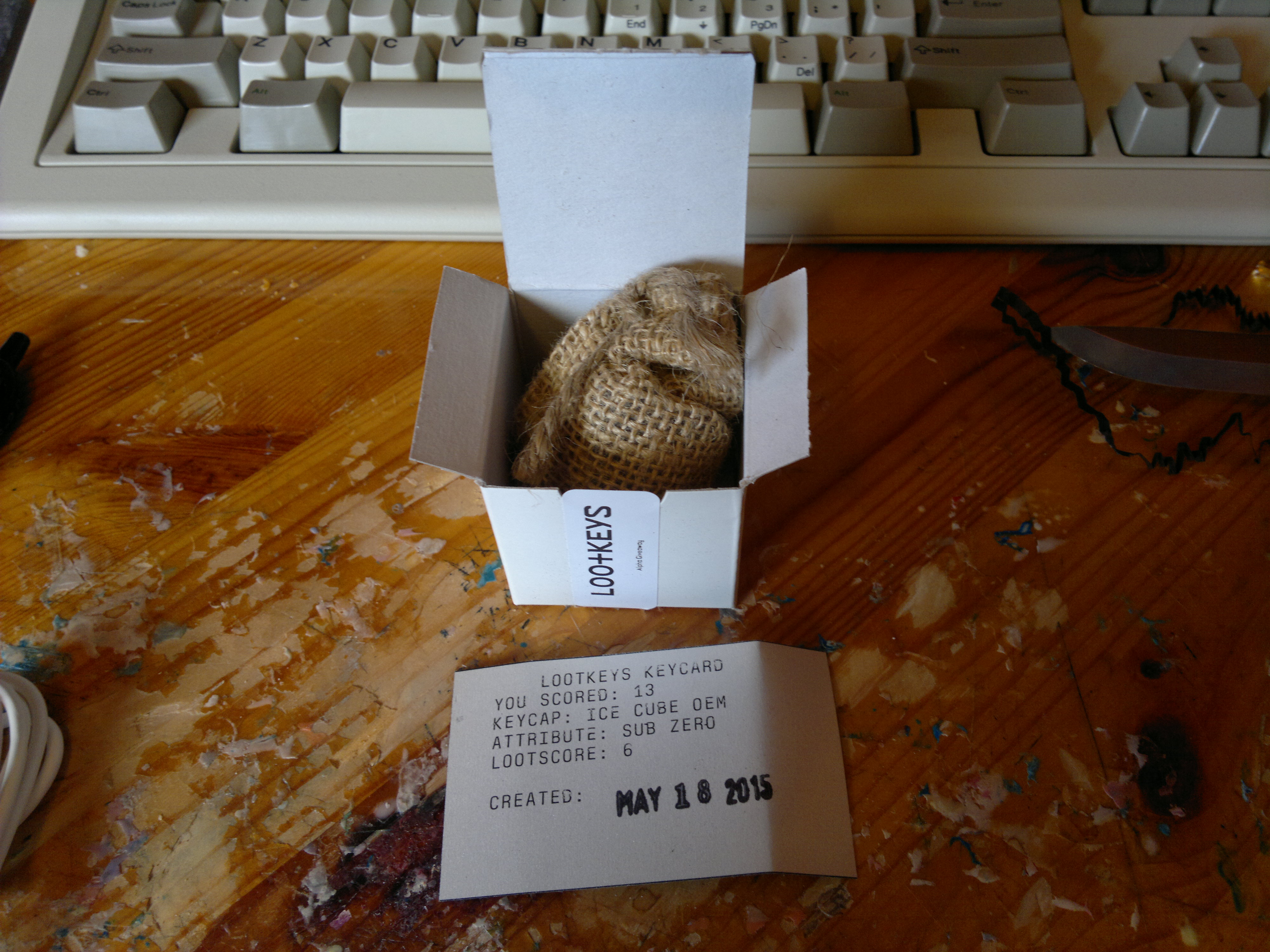 Inside the burlap type bag was a plastic bag containing a box which housed my single keycap. 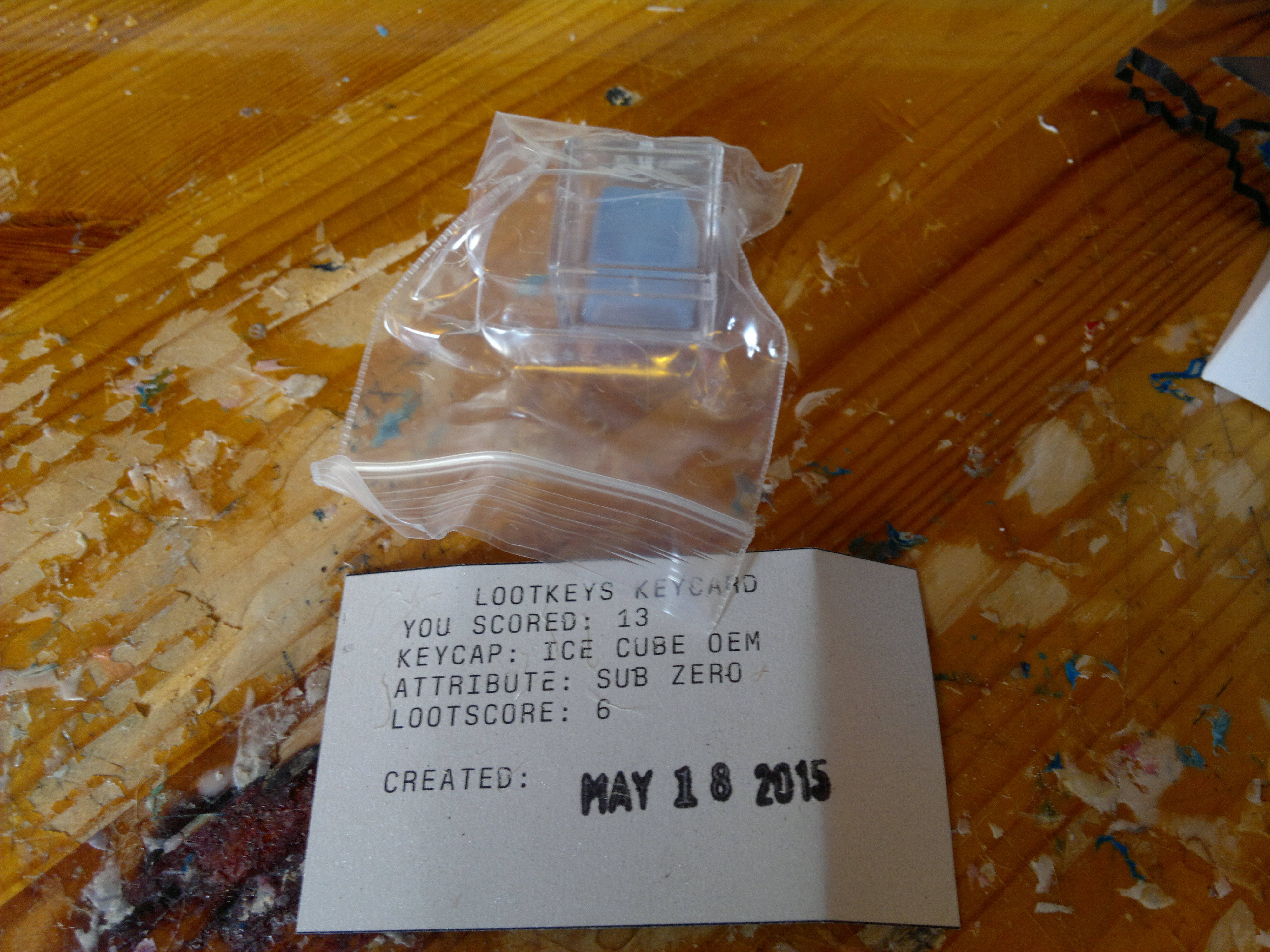 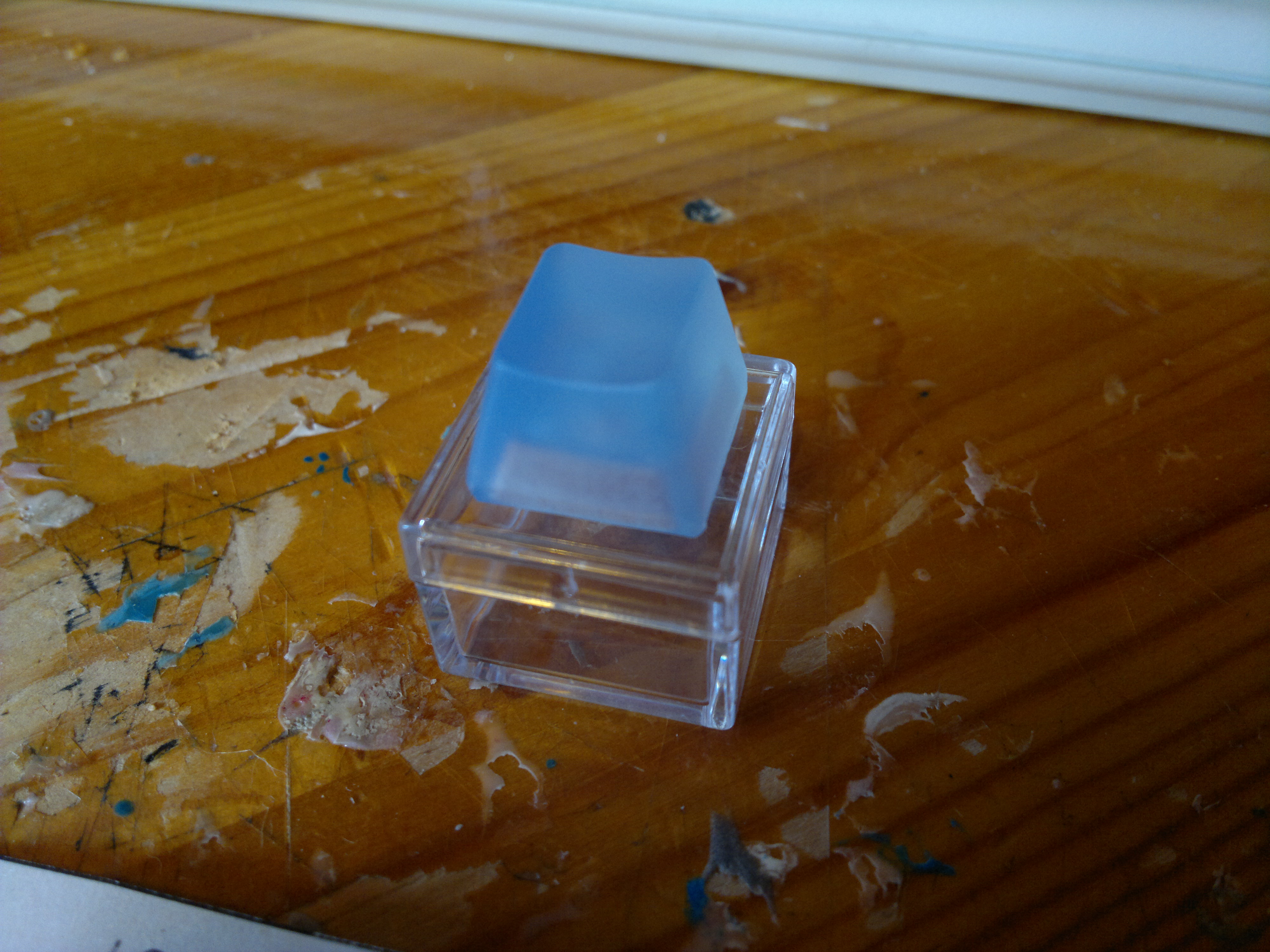 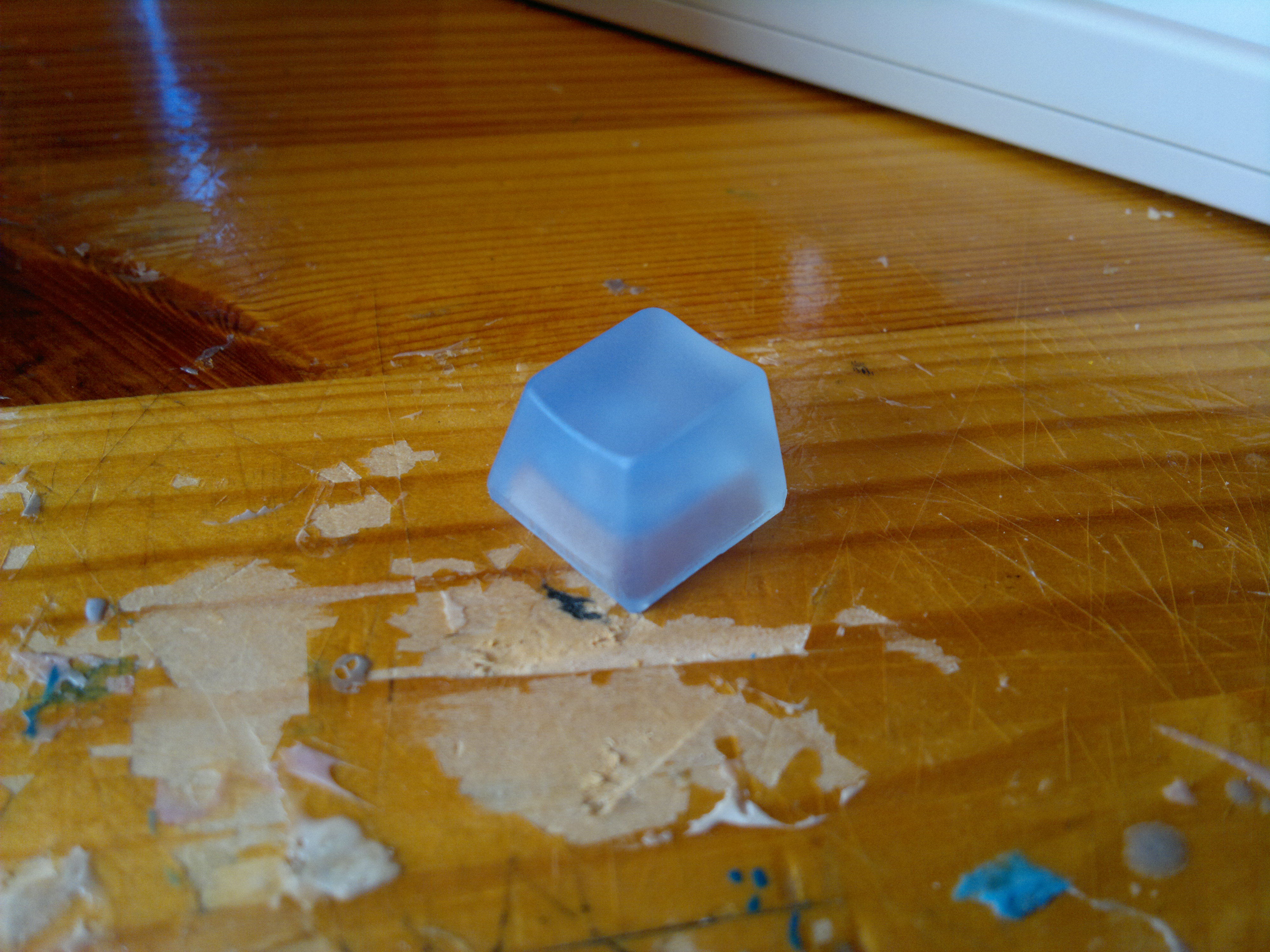 The keycap itself is something I was looking forward to before I was distracted by the packaging. From the photos on Whizzards design thread I expected a very nice keycap. I found his designs to be interesting and a little different. In some cases ambitious. My particular favourite was the camp fire.
The thickness of it is fine. Much thicker than your average stock keycap this is a good thing. The underside is also infilled which gives it a little extra weight and the stem additional support. Having the underside infilled also gives a nice aesthetic when you look at it from the outside, contributing to the ice cube like nature as it appears to be air caught in the ice. 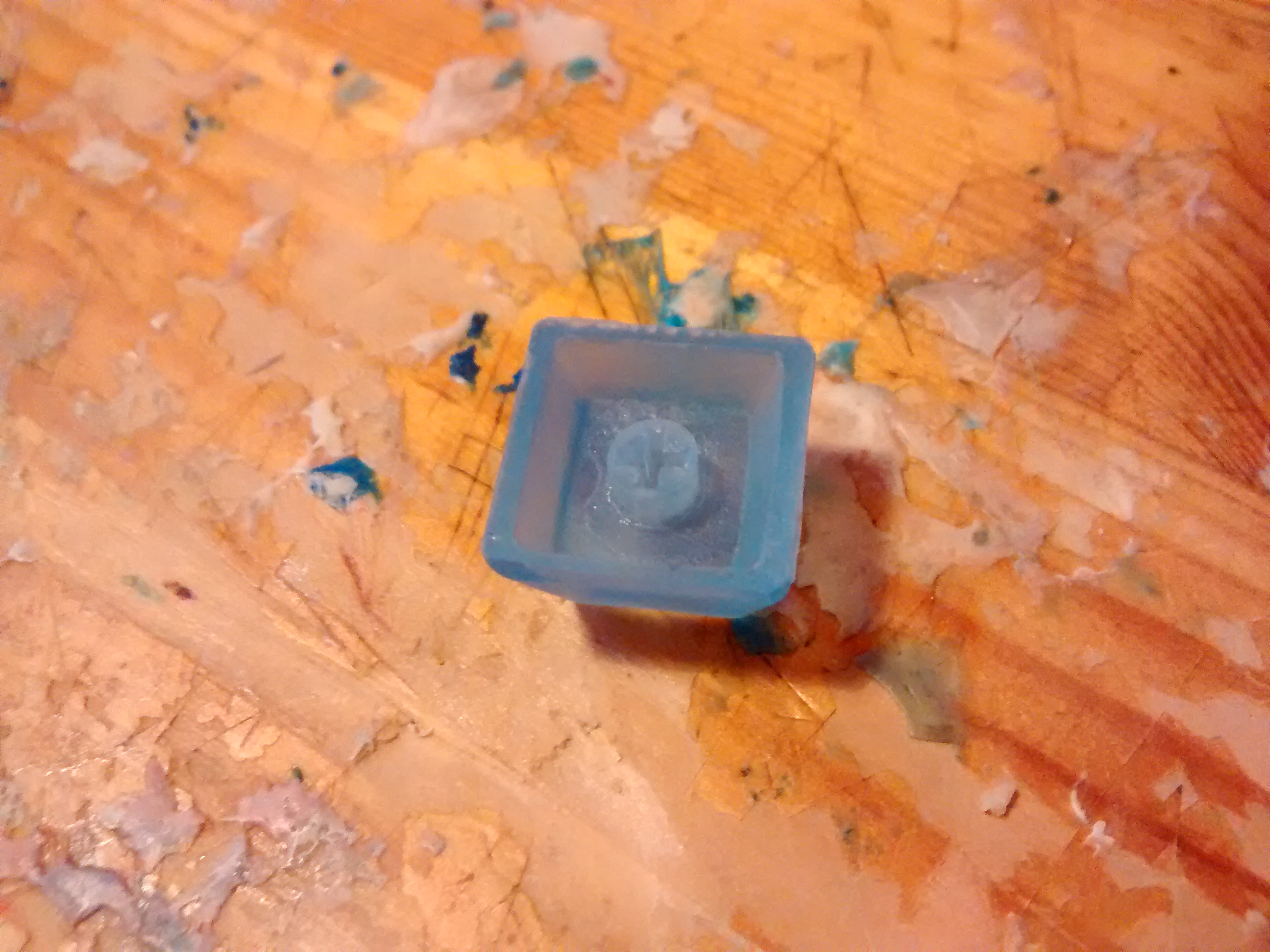 I have trouble getting any close up photos that are in focus enough to show off the texture. The texture is fine and feels nice in whatever resin that has been used.
There are no makers marks or signature marking the keycap, which I can’t say is in any detrimental to the keycap. But, I am a big fan of marks and symbols.

There is some roughness on the back side where I think some imperfections have been removed. Overall this has just become part of the keycaps finish. The colour is great and does look like ice. I can’t quite tell whether it is all translucent blue or is part colourless resin.

The fit is perfect and I have had no trouble. I was actually surprised at how similar it fit to a stock keycap. 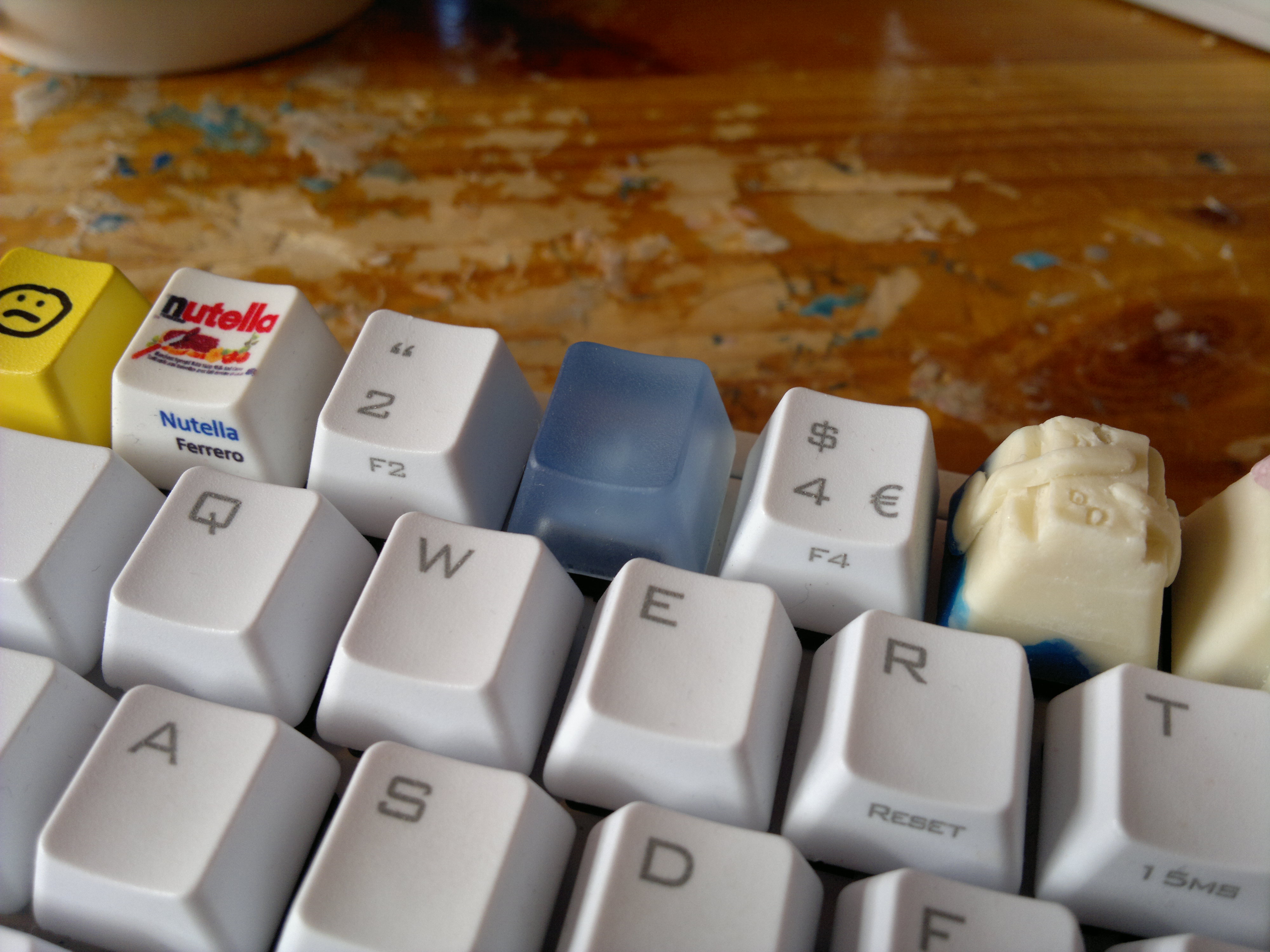 The keycap is very well made with a very nice design. Although it may appear to be a simple blank, it does have a very nice look. This is obviously one of Whizzard’s simpler designs but they don’t make themselves and a clear amount of work has been put into each keycap.
It seems what Whizzard is trying to do with this, is create an experience. Which is why I think Lootkeys Project is an apt name. There is a whole idea going with these keycaps. You can tell by the effort that has gone into the packaging. This is something than be thought of as trivial, but it truly does make a difference. All of this is contributing to the whole, making it a project. I like this keycap and am looking forward to what else Whizzard makes.

The future of the Lootkeys Project

I was trepidatious about showing the incredible packaging as I was not sure whether this would be kept up and set a high bar for the future. However, I was assured this is a core concept of Whizzards, and packaging and presentation will not be something he neglects. Whizzard is continuing to make keycaps but seems very meticulous in what is sold.